The prime minister, the deputy prime minister and the health secretary visited Guy's Hospital on Tuesday to announce changes to the Government's proposed health service reforms. 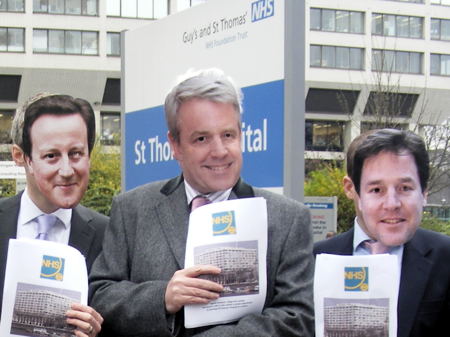 David Cameron spoke about his own experience of Guy's and St Thomas' NHS Foundation Trust to reaffirm the Government's commitment to treatment that is free at the point of delivery.

"It was a hospital in this trust – the Evelina Children's Hospital – where I remember sitting day after day with a really talented team of doctors and nurses and commissioners trying to help my son," said Mr Cameron.

"You don't have to worry for one moment about your cheque book or your bank Balance or how much you earn.

The PM was accompanied on the visit to Guy's Hospital by his deputy Nick Clegg and health secretary Andrew Lansley.

Bermondsey & Old Southwark MP Simon Hughes, deputy leader of the Liberal Democrats in the House of Commons, has welcomed the Government's 'reform of the reform'.

"The National Health Service is a wonderful national institution, but not everything works perfectly and there is certainly a need for improvement," said Mr Hughes.

"That is why it is right to have legislation to bring in changes to the NHS and why the government were right to pause and listen to seek much broader public, professional and political support.

"The new proposals are hugely better than the original ones and Liberal Democrat members and our conference representatives can rightfully be pleased that their clear concerns have been addressed.

"The test of an improving NHS will be whether the results are better for the British public who are the patients. I am confident that they will be."