Flat Iron Square at the junction of Union Street and Southwark Bridge Road has been reopened after five months of work to create a more pedestrian-friendly environment. 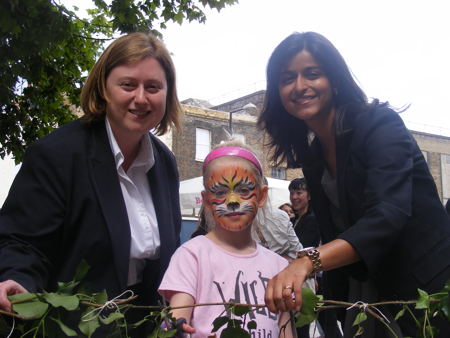 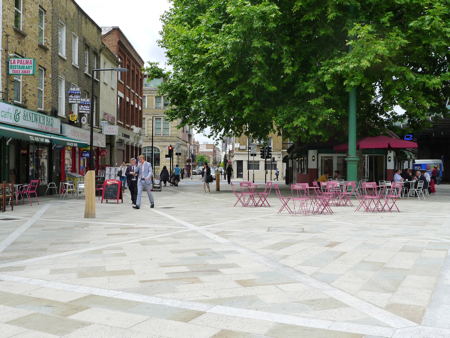 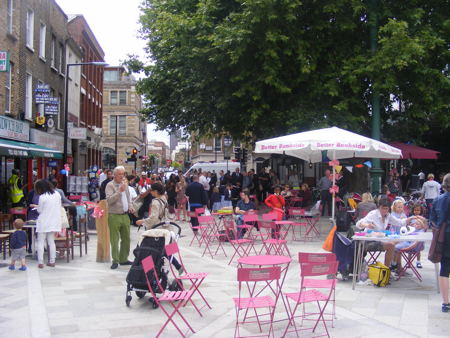 The same space was filled with activity during Friday's celebration event

The official opening on Friday afternoon was performed by Munira Mirza, arts and culture advisor to the Mayor of London, and Southwark Council's cabinet member for regeneration Cllr Fiona Colley.

The Ł500,000 makeover of Flat Iron Square is part of the Bankside Urban Forest project coordinated by Better Bankside and funded by the London Development Agency under the Mayor's Great Outdoors programme.

The southern arm of Union Street at Flat Iron Square has been closed to through traffic, creating a wider space for pedestrians and cyclists.

"The transformation at Flat Iron Square is exactly the sort of project my Great Outdoors programme was set up to support," says Boris Johnson, Mayor of London.

"Transforming a previous no-go area for pedestrians in to an open, clean and enjoyable place for everyone to enjoy benefits the entire community and I am confident that the improvements will also increase business for local traders – a great result all round."

Peter Williams, CEO of Better Bankside said: "Intensively used urban spaces present a series of challenges, not least how the needs and demands of different users are balanced.

"By adjusting the traffic flow in Flat Iron Square, we have created a larger public space within Bankside for people to linger and enjoy the local amenities of the shops and cafes."

The Bankside Urban Forest is a project to improve the public realm between Tate Modern and Elephant & Castle.

Last year the Mayor of London announced Ł4 million funding for the Bankside Urban Forest but a Southwark Council document published last week suggested that the funding had been withdrawn – a claim that has been denied by the LDA.

"Like all public funding sources, the LDA grant for the Bankside Urban Forest has been subject to review during the Comprehensive Spending Review, and therefore a degree of uncertainty has arisen as to the future availability of this funding stream," said a Southwark Council spokeswoman.

"The LDA and council have liaised closely to update the latest situation on the Bankside Urban Forest grant.

"Owing to the uncertainty around funding and the future of the LDA, the council had made conservative assumptions around the availability of Ł4 million grant, and reduced spend profiles in its forward programmes until such time as the LDA is able to confirm in writing that future funding remains available.

"These conservative spend profiles were reflected in the cabinet report, and we apologise for the inaccuracy in reporting that funding had been withdrawn from one of our key partners.

We can confirm that the Balance of the Ł4 million grant (after expenditure of Ł474,000 on Flat Iron Square) has not been withdrawn, but is being re-profiled to deliver over a longer time frame.

"The LDA is currently finalising details of the grant award for 2011/12 to deliver the next phase of Bankside Urban Forest projects after Flat Iron Square, and an announcement regarding this budget will be made imminently."