Ken Livingstone: Elephant & Castle regeneration should be "on a human scale"

Ken Livingstone says that if he is elected as Mayor of London next year he will work towards "an Elephant and Castle development that is on a human scale". 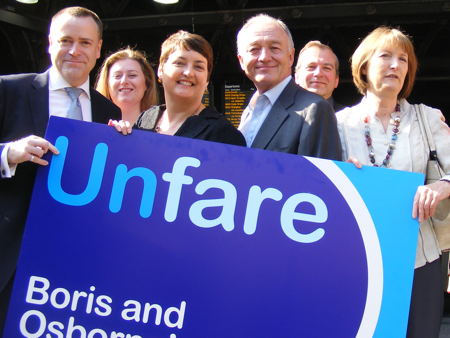 The Labour mayoral candidate spoke to the London SE1 website in Tooley Street as he embarked on a day-long tour of Southwark culminating in a public meeting in Peckham.

Mr Livingstone had been joined at London Bridge Station by his running mate Val Shawcross AM as well as Southwark Labour councillors. Along with Harriet Harman MP, they handed out leaflets to commuters arriving at London Bridge. Boris Johnson, the current incumbent at City Hall, made a hasty exit when he was greeted by his Labour rival.

The itinerary for Mr Livingstone's visit to Southwark includes a stop at Elephant & Castle where plans to remodel the northern roundabout as a civic square with an expanded tube station entrance have been blocked by Transport for London as part of Boris Johnson's "smoothing traffic flow" policy.

We asked the Labour candidate whether he would take a different approach if he is reelected to City Hall in May 2012.

"If you have a system where the next Elephant & Castle is like the old one – built so that people can belt through in their cars – it's a community that will never really come to life," he said.

"What you want is a scheme where people can cross the road and cyclists can go round, so it's not somewhere people pass through and the shopping precinct is just for the poorest people who can't afford to go somewhere better.

"You actually want a genuine community, and no-one ever built a community around a miniature Formula 1 track."

The other current dispute between Southwark Council and Transport for London concerns the funding for improvements to the tube station and road layout at Elephant & Castle. Southwark argues that TfL should contribute to the cost rather than leave the whole burden to be met by developers and the council.

"You've got to do a deal with the developers because you expect them to put something into the overall scheme," said Mr Livingstone. "It will depend on the particular problems on the site.

"Both central government and TfL can think in terms of putting some contribution in."

Mr Livingstone also renewed his commitment to the Cross River Tram from Peckham and Brixton in the south to Camden and Euston in the north, via Elephant & Castle and Waterloo.

"The Cross River Tram has a huge potential to help people in Southwark get where jobs are," says the Labour candidate.

"At the moment you've got 41 people chasing each job down at Peckham. That's just ridiculous. People need to be able to get out and around in London to where the jobs are coming."

But he is not hopeful of securing funding from the current government to build the tram system and believes that will have to wait until a Labour government is elected at Westminster.

"At my first meeting with Ed Miliband after he got the leadership and I got the mayoral nomination, his opening question was 'What will you do if you win?'

"I said: 'We'll start working on infrastructure projects and housing plans so that when you're elected and we get the go-ahead to do them, the plans are all ready.'

"From the moment the election is over we'll get officials at Transport for London starting to work up the [Cross River Tram] scheme again, so we are ready to go as soon as a Labour government is prepared to start a programme of investment in public works. Clearly both Ed Miliband and Ed Balls see that as the plan B."