Southwark Council leader Peter John has been accused of 'slagging off' the independent trust which runs Potters Fields Park. 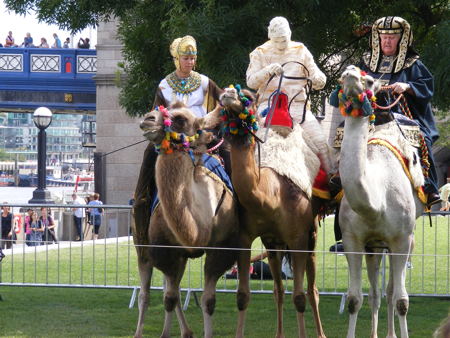 The Potters Fields Park Management Trust was set up to manage the riverside park after it was refurbished in 2007 and holds it on a lease from the council which runs until 2037.

Cllr Peter John recently criticised the trust on his blog for a lack of accountability, warning against the control of public assets by "the unelected and the self-appointed".

"It certainly appears, from reading Cllr John's blog, that he doesn't really like the community being involved in open spaces," she said.

"I'm talking, of course, about Potters Fields Park Management Trust which he has been slagging off.

"It seems like he's saying that it's not democratically accountable so I wondered if he could tell me if he thought chairs of tenants' and residents' associations who sit on that board count as democratically accountable, or if he is – in the words of one of his Labour Party members in my ward – 'being like Thatcher and getting rid of the GLC because she didn't like the decisions it was making'."

The council leader was a supporter of the highly controversial proposal to place an art installation in the park commemorating the victims of the 9/11 terrorist attacks. The proposal was put on hold after it was blocked by the management trust although the London SE1 website understands that a revised scheme has recently been presented to the board.

Cllr John replied that the debate goes to the heart of the 'big society' notion of handing over services to community management and that he had discussed the broader issues with Lambeth Council leader Steve Reed who is championing the 'cooperative council' idea in that borough.

"Yes, it's fine as a concept as long as everybody who effectively takes ownership of those [assets] has democratic accountability at some stage," he said.

"There are certainly people who are appointed to the trust in question who don't seem to have any network or diagram of democratic accountability, and that does concern me."

Cllr John also reiterated the concerns he articulated on his blog about the use of Potters Fields Park for advertising and promotional stunts.

"Just yesterday Hugo Boss had two cranes in the park with a huge banner.

"I do worry about the commercial use of this park. Cllr [Nick] Stanton stood in a chamber not far from here when he was putting these proposals forward, saying 'we need to see the end of the commercialisation of Potters Fields Park and put it in the hands of local people'.

"More often than not, I'm afraid, those local people can barely get into the park because of the commercial interests that are queuing up to use it. I do think that is a serious issue."

Local people's sense of alienation from a park that is often used for corporate activity was highlighted in a recent London Assembly report on open space in the capital which cited discussions about Potters Fields Park on the London SE1 forum.