A Diamond Jubilee image designed by 11-year-old Malika Mohammed has been unveiled in Potters Fields Park on the hoardings around Berkeley Homes' One Tower Bridge development. 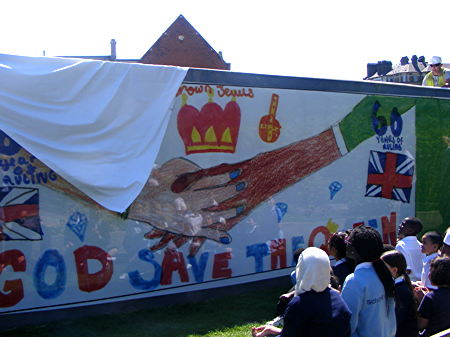 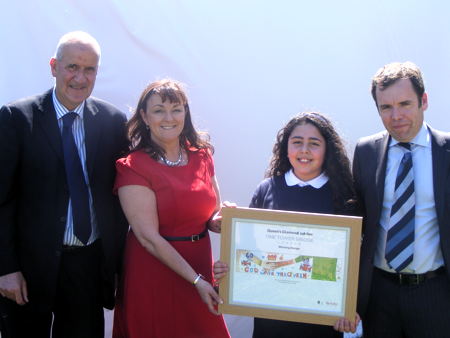 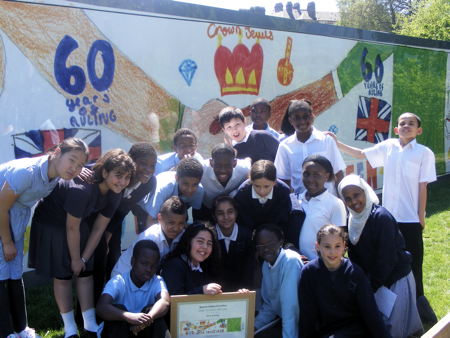 Malika with her year 6 classmates from Tower Bridge Primary School

The developer asked year 6 pupils from Tower Bridge Primary School to come up with a design for the jubilee hoarding when they visited the site in early May.

The winning entry, by Malika Mohammed, was unveiled on Friday afternoon.

"Berkeley understands the value of involving children in what is happening in their neighbourhood, both from a safety perspective as well as helping them to become active members of their communities in future," says Justin Tibaldi.

"This competition helped to catch their interest and we've been very impressed with the creativity demonstrated.

"Congratulations to Malika Mohammed for creating the winning design which will be visible to all, including the Queen, as she passes down the River Thames next weekend and to the runners up, Najma Ibrahim and Alima Kamara.

"All three winners will receive a commemorative coin to mark the occasion and as the winner, Malika has also won a family membership offering a year's unlimited entry to five Historic Royal Palaces."

Southwark Council's Eleanor Kelly added: 'The children should all be very proud of their entries. It was difficult to pick a winner, but this entry stood out for all three of us."

Park boss Stephen Cornford said: "The hoarding's location, bordering Potters Fields Park, will ensure that the local community is engaged with the One Tower Bridge development and the park as it progresses."

The first buildings in the One Tower Bridge development are due for completion in 2014.