A demonstration on Blackfriars Bridge against road layout changes brought evening rush hour traffic to a standstill on Friday. 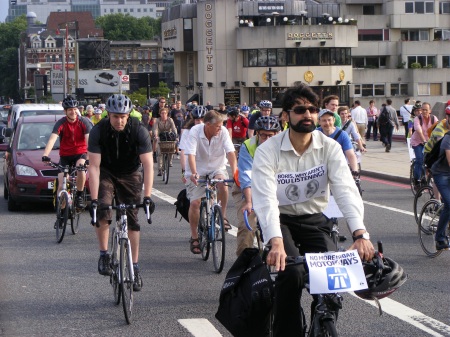 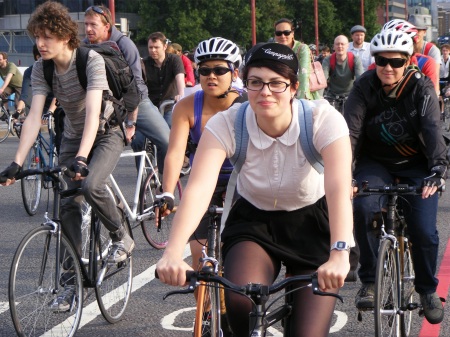 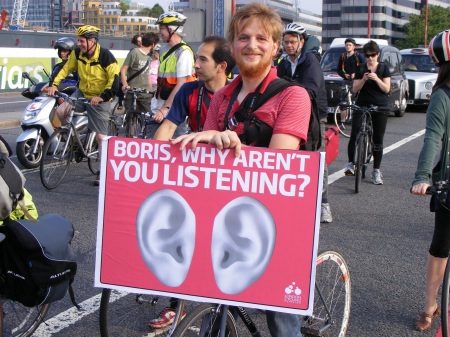 At 6.15pm more than 150 cyclists who were gathered outside Doggett's pub suddenly surged into the road blocking the northbound carriageway. A slow ride caused traffic to build up in Blackfriars Road and Stamford Street.

The protest ended about 6.45pm as the cyclists returned southbound to turn into Stamford Street.

The protest was aimed at forcing a re-think on a planned new road layout at the north end of Blackfriars Bridge. Cyclists claim that widening pavements for railway passengers using the new Blackfriars Station is being done at the expense of adequate cycle lanes.

London Cycling Campaign has written a letter to TfL's Managing Director of Surface Transport asking him to explain why these works are taking place in the face of so much opposition.

LCC's Mike Cavenett said: "London cyclists have said Blackfriars Bridge isn't safe; the London Assembly has voted to review the design; the Minister for Transport has agreed it isn't safe; even the Mayor has said that the bridge isn't safe. Why is nothing being done?"

The demonstration was just hours before work was set to start on the new road layout that will be capable of handling the 40,000 passengers expected to leave the upgraded Blackfriars station every day. The first stage of work should be completed by the early Monday morning 1 August.

Tfl claims that the new design accommodates the huge increase in demand from pedestrians whilst improving facilities for the estimated six per cent of people who travel through the junction by bicycle.