The historic George Inn – the last of the coaching inns which once lined Borough High Street - has reopened after a six-week closure for refurbishment. 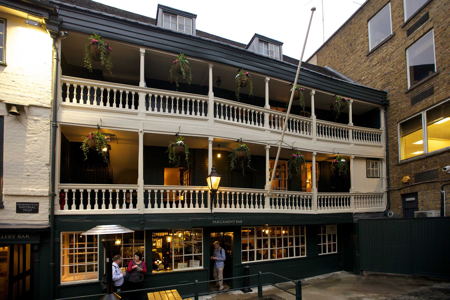 The current building dates back to 1677 but the inn is known to have already been well established during the reign of Henry VIII before it was twice destroyed by fire and rebuilt again.

Today the inn – which is a grade I listed building – is owned by the National Trust and leased by Greene King.

"We are delighted to have collaborated with Greene King on this refurbishment which gives a more authentic and sympathetic look to one of London's most historic coaching inns," says Sian Harrington, property manager at the National Trust.

The inn has a new cream and green exterior, replacing the previous black and titanium white which was introduced in the mid 20th century. The project team studied early photos and engravings of the pub before selecting the colour scheme.

A new menu has also been introduced throughout the inn including the new-look gallery bar, previously the restaurant, which will now be open daily.

Amanda Pickford, business development manager at Greene King, said: "The George is a fabulous venue and we have worked closely with The National Trust to carry out the work needed to restore and revitalise this building which will help maintain it for many years to come.

"To officially launch the Inn's new look we are inviting customers old and new to join us for a celebration event, which will include a hog roast, a band and the chance to win a Nebuchadnezzar of Moet, on Thursday 8 September from 6pm."

The George Inn is to be the subject of a book by award-winning beer writer Pete Brown – entitled Shakespeare's Local – which is due to be launched at the pub in 2012.