Councillors have voted to grant planning permission for a permanent commemorative artwork made from steel salvaged from New York's World Trade Center in Potters Fields Park next to City Hall. 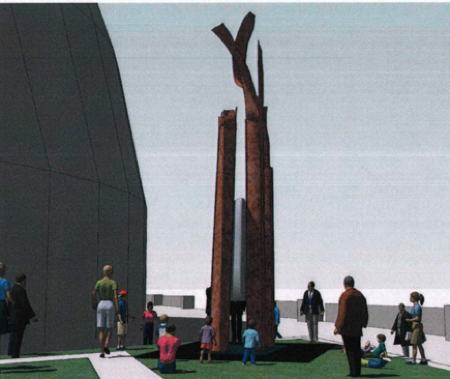 Steel from the World Trade Center, which was destroyed by a terrorist attack on 11 September 2001, could be installed on the riverside next to City Hall

The 9/11 London Project Foundation had applied to Southwark Council for planning permission for the installation immediately adjacent to City Hall despite the opposition of the Potters Fields Park Management Trust.

The structure would form the centrepiece of an educational programme timed to coincide with the tenth anniversary of the terrorist attacks on New York which took place on 11 September 2001.

Southwark's planning committee approved the application by four votes to one on Tuesday night. A sixth member of the committee abstained.

Planning officer Bridin O'Connor told the committee that the 8.5-metre high sculpture, by Miya Ando, would be an "elegant" addition to the park.

The committee heard from Jilly Frisch, secretary of the Shad Thames Residents' Association and a member of the board of the Potters Fields Park Management Trust, who said that the sculpture would be "too big and too violent" for the small riverside park.

She made it clear that the management trust, which holds a lease on the park from Southwark Council until 2037, had rejected the proposal in its present form. She reported that Gross Max, who redesigned the park in 2007, were also concerned about how the proposed artwork would relate to the rest of the park.

Peter Rosengard, founder of the 9/11 London Project Foundation, explained that the project is centred on an educational programme for schools across the country which requires a "commemorative public work of art" as a focal point.

He said that the steel to be used in the sculpture is the only such metal to be offered to the UK by the Port Authority of New York & New Jersey and that Potters Fields Park is a "splendid location" for this artwork which would serve a "positive educational experience for the steel given to Southwark by the people of New York."

Cllr Neil Coyle asked Mr Rosengard how he reconciled his proposal with the objection received from the September 11 United Kingdom Families Support Group who had said that they did not accept the use of World Trade Center artifacts "whatever their guise" and questioned the need for "a permanent visual reminder of the violence of September 11 especially in such a prominent riverside spot".

Mr Rosengard told the commitee that he was deliberately not proposing a 'memorial' out of deference to the families bereaved in the 11 September attacks. He said that the proposal is intended as a "beacon for our educational programme" and that there are some families of 9/11 victims who support the foundation's project for Potters Fields Park.

Asked why he had continued to seek planning permission in spite of the management trust's rejection of the proposed structure, Mr Rosengard said: "We intend to continue discussions in the weeks and months ahead".

Mr Rosengard explained that Potters Fields Park had been chosen for the artwork because it is an "iconic location at the heart of London". The Port Authority had also imposed some conditions on the use of the steel to ensure that they were put on permanent display in a prominent location with 24-hour public access, and the park met all these criteria.

He added that, as a lifelong Londoner, he had recently become familiar with the Southwark area: "I've just discovered this incredible new world south of the river," he said. "I think I might have to move here."

Mr Rosengard told the meeting that he was particularly captivated by the combination of old and new in the borough. "You have your Shard of Glass; well, this is a shard of steel," he said.

The committee was also addressed by Riverside ward councillor Anood Al-Samerai who emphasised that she was not completely opposed to the principle of a memorial or work of art relating to the 9/11 terrorist attacks. She did, however, have "very real concerns about how this has been handled".

Cllr Al-Samerai told the committee that local people are very proud of Potters Fields Park and reminded them that as well as being a prominent space for visitors to the capital it is also an important recreational space much used by local residents.

She said that the community had not been properly consulted on the proposed work of art and that it felt like the proposal had been rushed through.

"It doesn't feel like it's got everybody on board and engaged," she said.

Alex Clarke, chairman of the September 11 United Kingdom Families Support Group, wrote to Southwark Council on Monday setting out her group's objection to the proposal.

"Our loved ones died amongst the very wreckage that the 9/11 London Project Foundation plan to erect as a symbol," she wrote.

"I don't think the families and victims of the 7/7 bombings in London would feel it appropriate to erect the battered wreckage of a tube train, or a decapitated London bus, on the tenth anniversary of that event.

"This 8.5 metre tall image screams terrorism and brutality and we fear it will become a focus for a variety of demonstrations. Is this really a necessary teaching aid?"

She added that her group had been offered the pieces of steel but had declined them.

She concluded: "We already have a memorial. The Thames riverside deserves better."