The latest designs for the proposed memorial to Crimean war nurse Mary Seacole to be erected in the grounds of St Thomas' Hospital have been put on display this week. 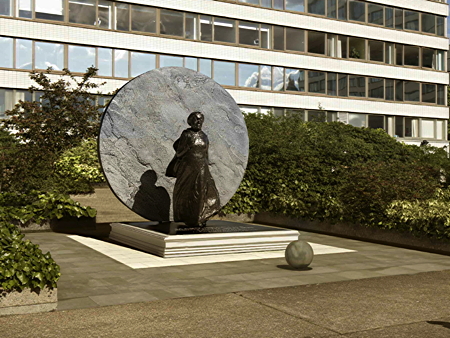 The Mary Seacole Memorial Statue Appeal has raised Ł100,000 of its Ł500,000 target to make the design by Martin Jennings into reality.

Jennings is well-known for the statues of Sir John Betjeman at St Pancras International rail station and the poet Philip Larkin in Hull.

For this project Jennings proposes a 10-foot bronze statue on a plinth backed by a large disc cast from earth brought from the Crimea.

Seacole, born in Kingston Jamaica in 1805, travelled the world providing nursing care wherever she could, including on the battlefields of the Crimean War. A well-known figure in her time, she has perhaps been eclipsed in popular memory by Florence Nightingale.

The memorial will be located in the gardens of St Thomas' Hospital, facing the Houses of Parliament, and will be the first statue of a named black woman in the UK.

The plans are on display at St Thomas' until Wednesday 14 September, and to coincide with the exhibition a reception was held in the hospital on Monday night. Guests included the Jamaican high commissioner Anthony Johnson.

Some people associated with St Thomas' have questioned the suitability of the proposed location given that Seacole has no specific connection to the hospital or the South Bank area.

"She's an iconic figure who ... is a heroine for so many people across the world," said Sir Hugh Taylor, chairman of Guy's and St Thomas' NHS Foundation Trust.

"She's a role model not just for nurses from the Afro-Caribbean community but clinic staff right across the board.

"We have a wonderful site to put it on, looking out over the Palace of Westminster. Really, it couldn't be a better place.

"This trust is run by and supported by people from minority ethnic backgrounds who do heroic things – like Mary Seacole – every day.

"Lots of them go unrecognised and unsupported, but many of them too have known some of the struggles she had – combatting racism and overcoming difficulties moving into different environments.

"It's just great, I think, for the staff of our hospitals, to have this honour.

"We sit here on the edge of one of the most diverse communities anywhere in the world. There are 130 languages spoken in Lambeth and Southwark. Both have hugely diverse populations. So where better to have a community facility to pay tribute to Mary Seacole than St Thomas'?"

The panels from this week's exhibition are available online as a PDF document. A planning application is due to be submitted to Lambeth Council in October.

The appeal is now inviting supports to sign up as Friends of Mary Seacole by making a small donation.