The community garden in Melior Street won a top prize at the London in Bloom Awards last week - and Team London Bridge won the business improvement district category. A prize for Potters Fields Park rounded off a successful day for the London Bridge area. 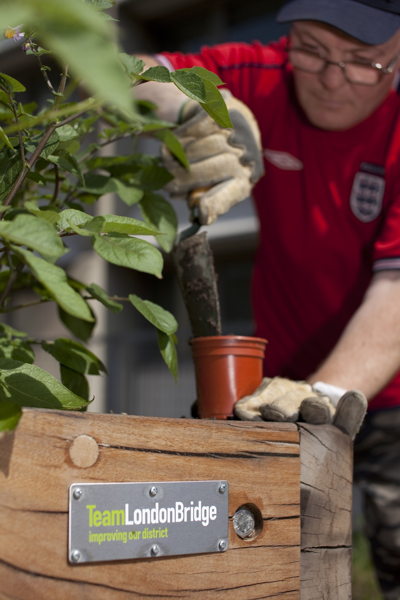 The London in Bloom awards were presented at City Hall on Friday.

Local businesses, Southwark Council and residents worked together with Team London Bridge to impress the judges when they visited in July, their efforts being recognised with a silver gilt award.

Team London Bridge beat competition from Better Bankside as well as business improvement districts in Croydon and Hammersmith to win the BID category.

"Our win will be well received by the many parties in London Bridge who are dedicated to improving their local environment," says Shane Clarke, deputy CEO of Team London Bridge.

"The increase in flowers, trees and gardening initiatives are more obvious, but the less noticeable advances in sustainable green practices are equally impressive and it’s fantastic that the efforts of all in London Bridge have been recognised by the In Bloom judges.

Melior Street Community Garden also triumphed, coming first in the Capital Growth category. The team from Putting Down Roots, a project stream of St Mungo’s, accepted the award on behalf of the gdroup of committed homeless or at risk people who tend to the garden on a weekly basis.

Produce from the garden including garlic and salad is now being served to customers at The Table on Southwark Street, as well as going to good use at the neighbouring Manna Centre on Melior Street.

Melior Street Gardens were redeveloped by Team London Bridge in 2009 as one of their three Pocket Plaza projects.

"For Melior Street Community Garden to win their category is an indicator of how impressive our partners at Putting Down Roots and their team of dedicated people are. The three awards given to organisations and initiatives within the London Bridge area is a tangible sign of the strength of our growing local community."