Royal Navy frigate HMS Sutherland, which recently saw action in the Libya conflict, will sail up the Thames to London on Tuesday 18 October for a five-day visit to the capital. 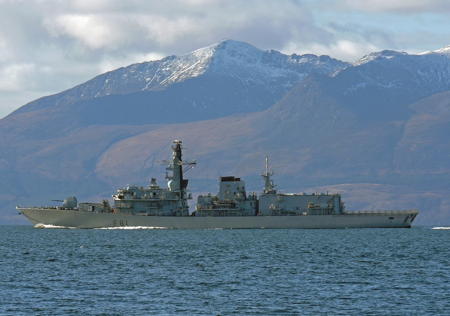 Known as the 'Fighting Clan', HMS Sutherland has returned to home shores after serving on the frontline in Libya alongside coalition forces.

While in the Mediterranean, she conducted boarding operations and provided naval gunfire in support of activity ashore as well as maritime security patrols.

She deployed at short notice in April to take up her role as the Royal Navy frigate within the Response Force Task Group (RFTG), some elements of which still remain off the Libyan coast.

Since her return, the ship has played a lead role in Exercise Joint Warrior, a bi-annual international naval warfare exercise off the north west coast of Scotland.

The type 23 frigate, which is affiliated to the Honourable Company of Master Mariners, will sail under Tower Bridge at around 7pm on Tuesday night before berthing alongside HMS Belfast.

Previous visits to the Pool of London by type 23 frigates include HMS Richmond in July 2010 and HMS Westminster in November 2009.

Although not open to the public during her time in the capital, Sutherland will play host to a number of senior government, military and civic VIPs at formal receptions on board, and will stage a capability demonstration for invited guests on Thursday 20 October at noon.

The ship's commanding officer, Commander Roger Readwin, will also make a variety of civic calls ashore, including to the Mayor of Southwark at the council's Tooley Street offices, while a larger group of the ship's company have been invited to attend a Trafalgar Night mess dinner on board the HQS Wellington later on the Thursday evening.

"We are looking forward to our duties in the City of London and renewing our strong links with the charitable organisation, the Company of Master Mariners," says Commander Readwin.

"Sutherland is here to highlight the flexibility of the Royal Navy and my team look forward to recounting the busy year we have had.

The present HMS Sutherland is the third to bear the name and has seen service all over the world, from the frozen seas of both the Arctic and the South Atlantic to the tropical heat of the Caribbean and the Far East.

Sutherland was built on the Clyde and was launched in 1996 by Lady Walmsley.

HMS Sutherland will sail back down the River Thames around 9.30am on Saturday 22 October.