A competition to select a developer to revive a stalled project to build a 44-storey tower at Elephant & Castle is about to be launched by the Homes and Communities Agency and the Greater London Authority. 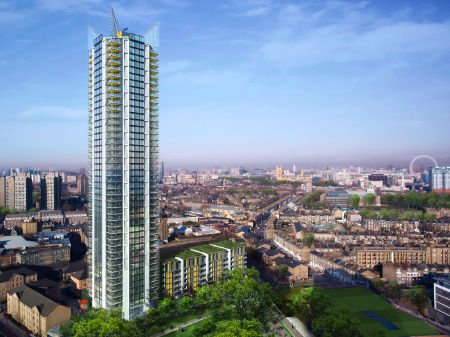 News of the impending launch of a competition to select a developer for the site of the London Park Hotel was released as a footnote to an announcement about much larger development plans at North Greenwich.

Details of the competition will be published in the Official Journal of the European Union.

It is nearly a year since we exclusively revealed that plans for the tower – designed by Rogers Stirk Harbour and Partners – would be resurrected.

Southwark's planning committee gave the go-ahead for the 360 scheme – at the time promoted by developers First Base – nearly four and a half years ago but the site on Newington Butts and Churchyard Row has remained empty ever since.

The scheme had been intended to provide a new home for the Southwark Playhouse as well as a total of 470 flats for sale and rent.

The site is owned by the Homes and Communities Agency and was originally acquired by the Government as part of an initiative to develop affordable homes for key workers in London.

If built, the 360 tower could form part of a cluster of skyscrapers at the Elephant & Castle together with Strata SE1 and the proposed 35 to 37-storey tower on the leisure centre site.

There is also the prospect of some high-rise development above the shopping centre as well as the Eileen House tower on Newington Causeway whose fate will be decided by the Mayor of London this spring.