A proposed 44-storey residential tower at Elephant & Castle could receive a share of a £1 billion Government fund to boost the private rented sector. 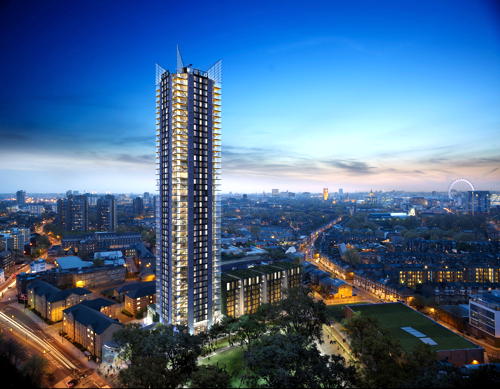 Last summer Mayor of London Boris Johnson announced that he had chosen Essential Living to built the long-delayed 360 London tower on the site of the London Park Hotel at Newington Butts.

The Mayor's choice of Essential Living was part of a drive to promote private rented sector developments in the capital.

The land was originally acquired for £18 million by the Government agency English Partnerships with the intention of building key-worker housing.

Control of the vacant site eventually passed to the Mayor of London.

Last week housing minister Kris Hopkins announced that the scheme has been shortlisted for a share of a £1 billion fund to boost the private rented sector.

"The Build to Rent fund will give tenants far more choice over where they live and raise the standard of the properties on offer.

"So I'm pleased that so many developers have applied for a share of our £1 billion fund, and that we are well on track to have work under way by 2015 on 10,000 new homes specifically for private rent."

Mayor of London Boris Johnson said: "With a soaring population and unprecedented demand for new homes in the capital we have set the most ambitious targets in the GLA's history to help provide the homes hard working Londoners need.

"The private rented sector has a huge part to play in this. Boosting the supply of good quality well-designed homes to rent will lead to a more balanced rental market, improved services for tenants, and helps bring forward new development, while stimulating economic growth in the capital."

However, Southwark Council recently warned that the 360 London scheme would be in competition with Delancey's development of private homes to rent on the Elephant & Castle Shopping Centre site.

In its response to the Mayor's housing strategy, the council said: "We support the ambitions to increase the supply of high quality private rented sector homes, including institutional investment in London's PRS, implementing the London Rental Standard, and to increase accreditation.

The council added: "Some regard also needs to be given to distribution in areas and boroughs where there may be two large potentially competing schemes such as at Elephant & Castle."