The latest proposals for the development of nearly 2,500 homes and dozens of new shops on the site of the Heygate Estate have been put on public display by Lend Lease in advance of an outline planning application to Southwark Council. 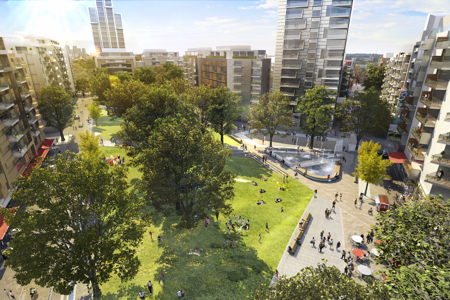 The proposed park at the centre of the development will incorporate many of the mature trees currently on the Heygate Estate, including a 100-year-old maple tree. Image by Cityscape. 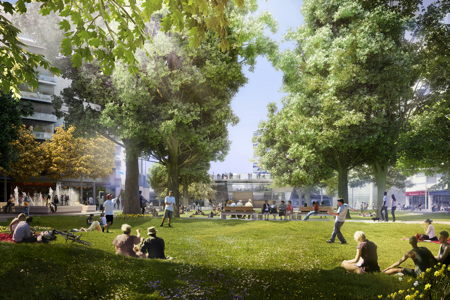 A view looking west towards Elephant Road. Image by Cityscape.

This week's announcement is the latest stage in a process which included exhibitions in July and October of last year.

The masterplan, drawn up by Make architects, provides a framework for the transformation of the Heygate site – which currently has around 1,100 council homes – to include more than twice that number of homes, mostly for private sale.

Although seductive computer-generated images have now been released, it is important to remember that none of the buildings shown have actually been designed yet.

Once outline planning permission is granted, different architectural practices will be appointed to draw up detailed plans for each block. Lend Lease promises a consistent but not homogeneous approach, with a shared palette that leaves scope for different approaches.

If the outline permission is granted, the north-west corner of the Heygate fronting New Kent Road will be one of the first sections to be developed, with completion of plot A due in five years' time. After that it will take almost another decade to see the plan through to completion.

Several aspects of the overall plan have changed since the last exhibition. The position of some of the larger proposed buildings has been tweaked to protect important local views, such as the spectacular view of St Paul's Cathedral from Camberwell Road.

The height of the tallest proposed new building on the Heygate footprint has been cut from 37 storeys to just 30 storeys. The three towers proposed for New Kent Road – indicated as 27, 22 and 16 storeys at October's exhbition – are now 25, 24 and 18 storeys.

The Walworth Road side of the site has also been tweaked to retain the line of mature trees along the eastern pavement from Elephant Road to Wansey Street.

This section will be lined with shops. "It will make a good connection from the shopping centre to the other shops on the Walworth Road where you've got a gap at the moment," says Cllr Fiona Colley, Southwark's cabinet member for regeneration.

Plans for another shopping street parallel with Walworth Road – intended for independent retailers – have been received with scepticism that a viable secondary high street could be successfully created. Rob Deck, Lend Lease project director, says that the company is serious about creating a mix of businesses.

Because all the shop units will be under Lend Lease's control, "we have the ability to plan it in a way that is much more likely to be successful," he says. He also promises an "active policy" to discourage payday loan shops and similar businesses.

Rob Deck is frank about the need for presales to help secure development funding – and the difficulty of getting prospective owner-occupiers to buy off-plan two or three years before a home is ready for occupation.

"That doesn't mean that we're going to sell them all overseas," he says. "It won't just be an enclave for overseas buyers or investors."

The agreement between the council and Lend Lease has a provision that 25 per cent of the new homes will be 'affordable housing'. The council now says it hopes to pull in funding from elsewhere to raise that proportion.

The council points out that the project has a 15-year lifespan: who can say what the national policy on affordable housing and the economic picture will be like 7 or 8 years from now?

Although the redeveloped Heygate will have far fewer social rented homes than its predecessor, Cllr Colley is adamant that, across the wider Elephant & Castle regeneration area, the Heygate's 1,100 council homes will be more than replaced by new housing association homes.

The outline planning application will also include provision for up to 616 car parking spaces – a figure that Cllr Colley admits is higher than the council's planning policies would expect, but which she claims is essential for a viable development.

Although this week's exhibition concentrates on the Heygate Estate site, its development is closely linked to the long-running debate over the future of Elephant & Castle tube station and the northern roundabout.

Lend Lease's Rob Deck confirms that two proposals for the Northern line station are on the table: a plan for extra lifts which wouldn't require central funding from Transport for London or the Government and a more expensive option for the provision of escalators.

"We are working with government on how those solutions are funded," says Rob Deck.

On the vexed question of the northern roundabout, Deck says that Lend Lease's own analysis backs up TfL's insistence that the basic form of the roundabout has to stay. The debate now is on how to provide surface-level pedestrian crossings in place of the current subways, although some of the subways may be retained to provide extra capacity.

Anyone who has lived in the Elephant & Castle area for any length of time will have been invited to countless exhibitions and consultations. Why is this one any different?

"It's never been this well advanced," says Cllr Colley. "This planning application is about to go in, the first phase of demolition has been completed. I really feel like it's all coming together now.

"I understand why people are cynical. People won't believe it till they really see it. We're committed to seeing it happen."

Rob Deck adds: "It's a scheme we're proud of. It's going to be transformative for the place."

The exhibition at the Consultation Hub, 184 Walworth Road SE17 1JJ is open as follows: