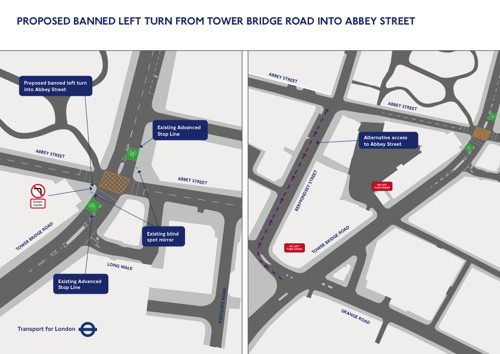 "We are proposing to ban the left turn from Tower Bridge Road into Abbey Street to reduce the potential for conflict between cyclists and left-turning vehicles," says TfL on its consultation website.

"Traffic counts show that fewer than four vehicles per hour make this turn at peak time.

"We intend to ban the left turn towards the end of December 2012 and will advertise the changes to the traffic order in November."

Instead, drivers heading for the western arm of Abbey Street (towards Long Lane) will be diverted via the southern section of Bermondsey Street.

In December it will be the first anniversary of the death of cyclist Ellie Carey who was fatally wounded in a collision with a lorry at the junction.

Ellie's family and local politicians have long been campaigning for further safety improvements at the junction.

In July TfL named the junction as one of 100 intersections where cycle safety measures would be prioritised.

"We are also developing proposals for more substantial improvements for cyclists and pedestrians at this junction, including improved pedestrian crossing facilities," says TfL.

"More information will be available early next year, once these proposals have been developed further.

"Earlier this year we marked out advanced stop lines (ASLs) in green and put blind spot safety mirrors on the signals at the junction so cyclists are more visible to vehicles turning."

TfL is inviting public responses to its proposals until 14 November.

Last week Southwark Council's cabinet member for Transport, Cllr Barrie Hargrove, called for speed limits to be reduced on roads in the borough.

He said: "If there is a legacy for Hichame Bouadimi, Ellie Carey and all the other unecessary deaths on our roads, it has to be that speeds on our roads of our cities are cut.

"We will be taking this forward as a council to say that 30 mph on our roads is too much and we want those speeds cut."