London Assembly member Caroline Pidgeon has criticised Transport for London's proposals for changes to the BFI IMAX roundabout in Waterloo and the Tower Bridge Road / Abbey Street junction in Bermondsey. 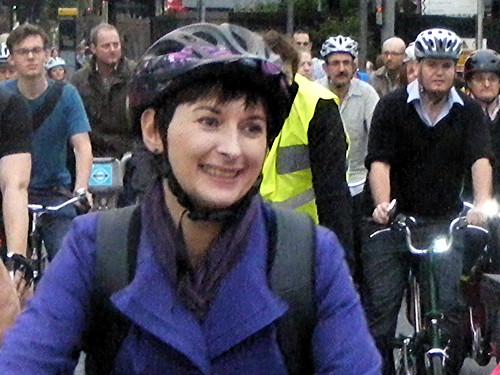 Last month we reported on plans by Transport for London to introduce a 20 mph speed limit and some new cycle lanes at the Waterloo BFI IMAX roundabout and to ban left turns from Tower Bridge Road into the western arm of Abbey Street.

Since then, the London Cycling Campaign has called for TfL to "to go back to the drawing board with its design for Waterloo roundabout, and to announce a timetable for a complete overhaul of this major junction to make it safe and inviting for all Londoners to cycle".

The LCC has urged TfL to consider improvements to alternative cycling routes near the Waterloo junction such as Cornwall Road and Upper Ground.

"While some of the changes are welcome they ultimately do not offer a real step change in the way that people will travel," said Caroline Pidgeon AM.

"For the occasional or nervous cyclist the Transport for London plans do not make cycling across Waterloo Roundabout or along Tower Bridge Road any more appealing.

"The plans make cycling marginally better for those who already cycle, but they fall far short of ensuring that cycling is safe and attractive for the many people who are currently deterred from doing so.

"It is disappointing that these proposals do not go further."

In her letter to TfL, Ms Pidgeon criticises the proposed timetable for the works which are due to start a week after the final day for comment.

"I do not believe that seven days is a long enough period for the consultation responses to be properly considered and recommendations taken on board," she writes.

"I understand that the junction review process has involved many of the stakeholders who are likely to respond to this consultation. However it is disingenuous to call this a consultation when there is little realistic chance that any of the recommendations will be taken into account in any meaningful way."

Ms Pidgeon also echoes LCC's call for greater use of Upper Ground and Cornwall Road to allow cyclists to avoid the Waterloo gyratory. She also suggests that cyclists should be encouraged to use Bermondsey Street as a safer alternative to Tower Bridge Road.

"At both Waterloo and Abbey Street I am advocating some relocation of cyclist routes," she writes.

"In the long term we do need to ensure that we are offering cyclists safe, direct and quick routes.

"However I think as an interim measure encouraging the use of alternative routes will be far more effective than the sort of measures that are proposed in these designs.

"Whilst I am in favour of junction redesign, the designs that you have presented are simply too timid and limited."