The charity which manages Red Cross Garden and Waterloo Millennium Green has been shortlisted for an Octavia Hill Award by the National Trust. 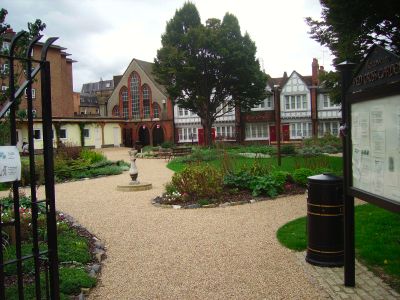 Red Cross Garden: created by Octavia Hill and restored to its Victorian glory by BOST

To mark the centenary of the death of housing and open space pioneer (and founder of the National Trust) Octavia Hill, the NT has teamed up with Countryfile Magazine to launch a set of awards to celebrate individuals and groups that are keeping her legacy alive.

Bankside Open Spaces Trust has been shortlisted in the Green Space Guardians category along with the Friends of King Henry's Walk Garden in Islington and Waterloo-based Groundwork London, a charity which works across the capital.

"BOST is really delighted to have been nominated by one of our supporters, and now we are one of three competing for this award," says director Helen Firminger.

"It would be brilliant to receive this award at BOST as this would really demonstrate the value of the work carried out by the many volunteers, residents, and staff who have lead the sweeping tide of improvements across our parks and open spaces."

BOST has overseen the restoration of Red Cross Garden which was established in the 1880s by Octavia Hill to provide a recreation space in the midst of industrial Southwark.

The award winners are chosen by public vote and you can show your support for BOST by voting online until Monday 9 April.

• BOST is also celebrating two recent grants from Borough & Bankside Community Council's Cleaner Greener Safer Fund. Councillors have approved a grant of £15,000 for a project to make Marlborough Playground greener and £10,000 for the project to protect and enhance the ruins of Winchester Palace in Clink Street.