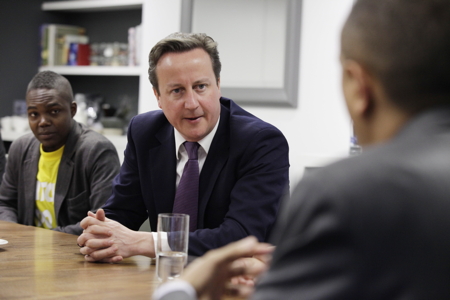 David Cameron at The Fire Station on Wednesday

Mr Cameron took part in a bakery lesson as the first trainees in a new apprenticeship scheme to support former homeless people in London graduated at Brigade Bar and Bistro.

The training scheme was launched in September as part of the project led by PricewaterhouseCoopers to establish a social enterprise hub in the former fire station in Tooley Street.

The trainees were part of the United Kitchen Apprentices programme run by social entrepreneur Simon Boyle's Beyond Food Foundation.

The majority are now in full time employment at venues including the Hilton London Tower Bridge and Carluccio's.

"I don't think any of the team realised how much they had achieved until they graduated today," say Simon Boyle.

"It's a major achievement for everyone involved, not just the apprentices, and it has not been without its challenges. It marks a line in the sand between what's gone before, and their future as qualified, highly skilled craftsmen in food.

"Seeing the new group of apprentices join us as here today has really brought home to the graduates and trainees just how important a programme like this is in helping people take a step to transform their lives, and how important their role is in making that change. I'm incredibly proud of all of them."

PwC partner Paul Cleal added: "It was a long road to get the Fire Station business centre project delivered, but to see the impact on the trainees, in such a short space of time, has made every second worthwhile.

"Brigade is the beating heart of the Fire Station project to support social enterprise, and offers a sustainable opportunity for people to transform their lives. It's a powerful example of social enterprise in action."

A second cohort of trainees have now joined Brigade, the next stage of a 145-place apprenticeship and work experience programme.

The prime minister visited Tooley Street en route to the London Stock Exchange in the City where he announced a Ł600 million Big Society Capital fund.

"For years, the City has been associated with providing capital to help businesses to expand," said Mr Cameron.

"Big Society Capital is going to encourage charities and social enterprises to prove their business models – and then replicate them. Once they've proved that success in one area they'll be able – just as a business can – to seek investment for expansion into the wider region and into the country.

"This is a self-sustaining, independent market that's going to help build the Big Society."

The Fire Station, which has been operating since last autumn, was officially opened in February by Mayor of London Boris Johnson.