Commuters arriving at Blackfriars Station on Thursday morning were treated to live theatre and comedy performances to highlight the station's new connection to the cultural centres of the South Bank and Bankside. 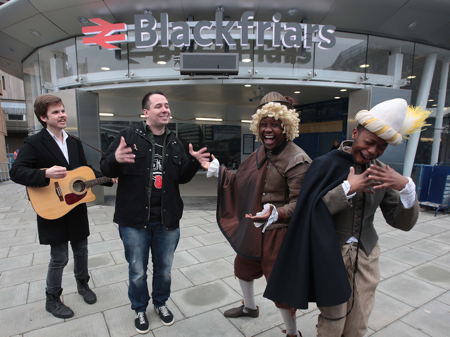 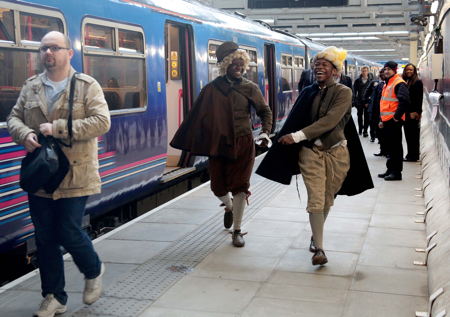 Two Gents Productions, who will stage a production of The Two Gentlemen of Verona in the Shona language at Shakespeare's Globe next month as part of the Globe to Globe Festival, performed short scenes on board a First Capital Connect train between West Hampstead and Blackfriars.

At Blackfriars hip-hop comedy duo Abandoman, posing as station staff, greeted passengers with Shakespeare-inspired improvised rap. They are currently performing at the E4 Udderbelly next to Jubilee Gardens on the South Bank.

"The opening of the south station has made Blackfriars a cultural gateway, bringing people on the Thameslink route within easy reach of some of the very best culture that London has to offer," said Laurence Whitbourn, Network Rail project director.

"We wanted to make the daily grind of the commute a bit more fun and demonstrate the kind of entertainment that is now directly accessible from Blackfriars."

Alan Bishop, co-chair of the South Bank and Bankside Cultural Quarter and chief executive of Southbank Centre, said: "Next Monday, Shakespeare would have celebrated his 448th birthday, so these performances are a fitting tribute to a man who found his feet performing within the immediate vicinity of Blackfriars."

Next month sees the end of the long-term weekend closure of the Thameslink route through central London, with Blackfriars once again offering a seven-day passenger service as well as late-night through trains on weekdays.