Advanced stop lines for cyclists will be painted on the road this week at the Bermondsey junction where student Ellie Carey was killed last December. 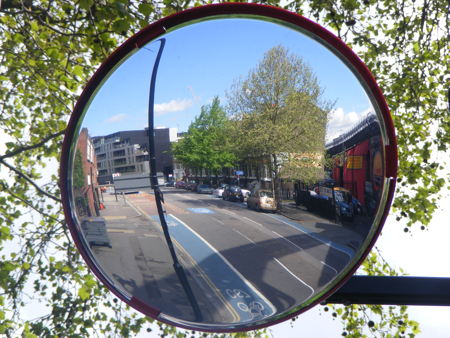 Trixi mirrors, like this one in Southwark Bridge Road, could be installed at the Abbey Street junction by the end of May

"Work to redesign the junction of Tower Bridge Road and Abbey Street is currently being finalised as part of our junction review programme," a Transport for London spokesman told us this week.

"Ahead of this, two new five-metre advanced stop lines for cyclists will be installed at this junction on Tower Bridge Road to allow safer positioning ahead of other traffic. We expect this work to be completed during the next week."

Ellie Carey's father Allister said: "I am pleased that TfL now appears to recognise the importance of providing a safer environment at this junction not only for cyclists but also for pedestrians providing the further proposals set out in their email are implemented later this year.

"At the time of Ellie's death in December last year, we said that our wish was for something positive to come out of this tragic and avoidable incident.  We feel that this initial objective has now been achieved although so much more needs to be done to reduce danger."

As well as advanced stop lines, Trixi mirrors which give drivers of large vehicles better visibility of cyclists could be installed at the junction by the end of the month.

TfL also said that it would be holding a full consultation on proposals for an improved scheme for cyclists and pedestrians at Abbey Street later this summer.

"It is tragic that it took the death of a young woman and a local campaign before these improvements could be made," said Simon Hughes MP.

"But it is welcome news that the safety of cyclists on Tower Bridge Road is now being addressed in a serious way by TfL.

"Cycling is a healthy, easy and environmentally friendly way to move around our borough and our capital – but too many people are put off cycling because of London's dangerous roads."

In a separate development Southwark Council's cabinet member for environment, Cllr Barrie Hargrove, has decided to spend £50,000 of TfL grant money on Trixi mirrors at road junctions in the borough.

"Trixi mirrors are proven to help cut the numbers of cyclists involved in serious and fatal accidents on our roads," said Cathedrals ward councillor Geoffrey Thornton.

"The Liberal Democrats in Southwark have made cycle safety a priority locally and have been calling on the council to use this funding to install Trixi mirrors for the past two months.

"This news is a step in the right direction for keeping our cyclists safe, but there is still a lot more that should be done. We will keep the pressure on Labour Southwark to ensure that they protect people on Southwark's streets in every way possible."