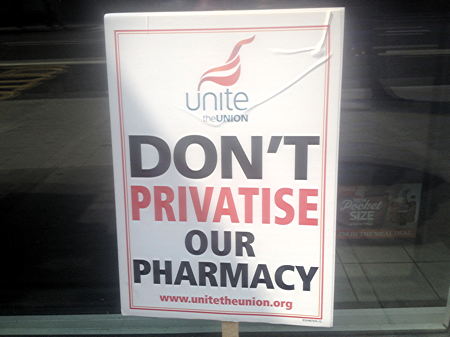 Last Wednesday's lunchtime protest by members of the Unite union was intended to raise public awareness of plans to hand over pharmacy services at Guy's Hospital and St Thomas' Hospital to the supermarket firm.

"This went through a public procurement process in accordance with public sector requirements, and Sainsbury's is the preferred bidder," a spokesman for Guy's and St Thomas' NHS Foundation Trust told the London SE1 website.

The spokesman said that the change would lead to an "improved patient experience" with reduced waiting times, increased choice and reduced costs, as well as access to a retail pharmacy service on the hospital sites.

"Evidence from other trusts which have followed a similar route indicate a substantial fall in waiting times for outpatient prescriptions and improved patient pathways for home healthcare," said the spokesman.

According to a report on the People's Republic of Southwark website, union activists are planning further protests at Sainsbury's stores near St Thomas' Hospital and King's College Hospital.

• The Unite union failed to provide a substantive response to a request for comment on the campaign, despite repeated requests.