Passengers at London Bridge Station on Tuesday found themselves funnelled through a one-way system as Network Rail held a rehearsal of its arrangements to combat overcrowding during the Olympic Games. 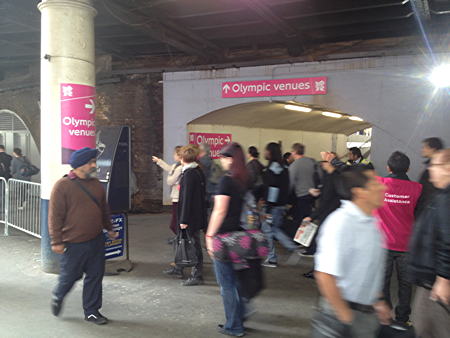 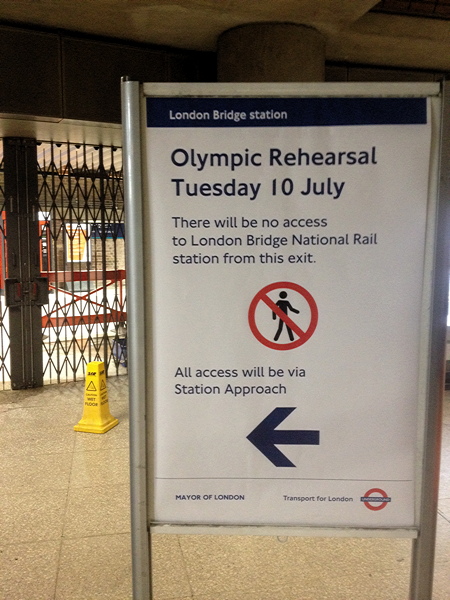 The station had first tested its Olympic plans on the day of the Thames Diamond Jubilee Pageant when heavy rain and poor signage meant that chaotic scenes unfolded on Duke Street Hill.

Last month representatives of Network Rail and Transport for London told the London Assembly that they had learnt lessons from the pageant weekend.

Whilst the signage outside the station had been improved since the first rehearsal, during Tuesday morning's rush hour a member of London Underground staff resorted to holding a handmade cardboard sign to direct passengers to the mainline station entrance.

New pink signs erected around the station direct games spectators arriving at the station to walk across London Bridge to Monument Station to reach the Olympic venues, rather than catching the Jubilee line which is expected to be particularly busy during the games.

"We appreciate that today's rehearsal is frustrating for some commuters and that it takes some people longer to get through the station than normal," said a Network Rail spokesman.

"We would like to reassure people that today's test is crucial to make sure that large numbers of people can use the station safely during games time.

"30 July, when the equestrian event is held at Greenwich Park, is expected to be the busiest day at London Bridge with an additional 69,000 people using the station, often travelling in different directions to the normal commuter flow.

"The station is not designed to cope with this so we need to use crowd management measures including one way systems, signage and additional customer service staff."

Southwark Council, which has its main offices in Tooley Street, is among the local employers taking special measures to prepare for the expected travel disruption during the games.

Council officers will be encouraged to adjust their start and finish times or work from home during the Olympics and Paralympics, with offices opening earlier and closing later then normal.

"We are working very closely with London Underground and Network Rail, to ensure that we have the most update information on the demands of London Bridge and other transport networks that affect Southwark staff," council leader Peter John said last week.

"We are fully aware of the pressures at London Bridge. We have provided information advice and guidance to staff on how to plan their journeys to work during busy periods, to ensure that the council continues to provide its services throughout the Olympic period."