Controversial plans for an orbital road tunnel around inner London could 'unlock the potential' of Bricklayers Arms, according to a document launched by Boris Johnson this week. 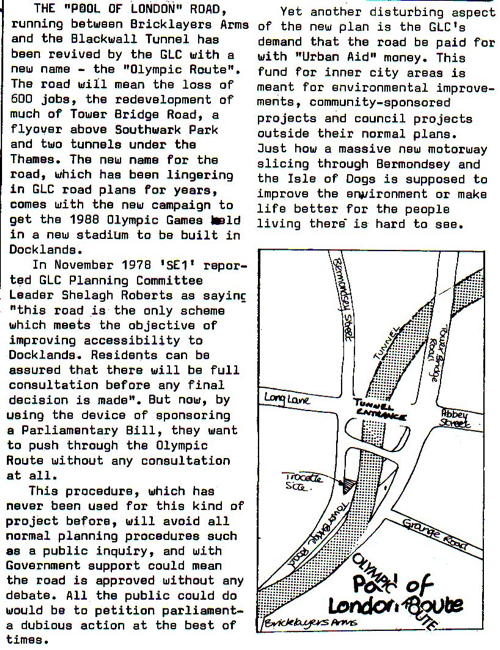 Papers published this week as part of City Hall's consultation on the London Infrastructure Plan 2050 include the prospect of a tolled road tunnel to replace the capital's existing surface-level inner ring road.

Estimates for the cost of the tunnel – which was recommended by the roads task force set up by the Mayor – range from £15 billion to £30 billion.

A document published this week said: "A replacement ring road, in the form of an inner orbital tunnel, could enable more efficient and reliable essential vehicle movement (reducing congestion in central London by up to 20 per cent) while freeing up space on the surface to vastly improve the public realm and significantly improve conditions for the most space efficient and healthy surface transport modes of walking, cycling and bus.

"This would help fully unlock the potential of places around the Inner Ring Road like Old Street and Bricklayers Arms and relieve pressure on Tower Bridge.

"The development of key areas such as these that straddle the inner ring road could support 170,000 additional jobs and help extend central London agglomeration benefits."

City Hall has also raised the prospect of putting part of the Old Kent Road in a tunnel as part of a package to tackle congestion and "mitigate the impact of strategic roads on adjacent communities and create better places".

"The Old Kent Road (A2) near Elephant & Castle has been proposed as a suitable entry point for thousands of cars, lorries and vans.

"The construction process would mean years of dust, noise, vibration and general disruption for Southwark residents. In any case, whilst the idea of banishing traffic from some of London’s busiest roads and sticking it in underground tunnels may seem attractive, there is plenty of evidence to show that new roads bring new traffic and we end up with things worse than they were before.

"This is a hugely wasteful scheme. £30 billion is enough to fund two Crossrails, make London’s streets truly safe and accessible for those on bike or foot, or to get trucks off our streets by investing in river freight.

"We need projects that will ensure London is a liveable city with a sustainable future. The Mayor has asked for Londoners’ views on this project. I urge you to write to him sending a clear message: no new roads."

35 years ago the Greater London Council proposed a road tunnel between Bricklayers Arms and the Blackwall Tunnel as part of London's bid to host the 1988 Olympic Games.