ITV is planning to install multicoloured lighting on its South Bank tower as part of the broadcaster's relaunch to be unveiled in the new year. 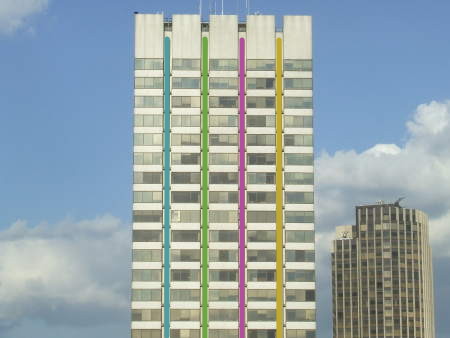 This mockup, based on submissions to the council, shows how the lighting might appear on the tower. NB the illumination is proposed for night-time hours.

ITV plc has applied to Lambeth Council for advertisement consent for the installation of LED light fittings from the 4th to the 22nd floor of the 1970s office block at the riverside TV studio complex in Upper Ground.

"The lights will be directed at the facade and project different coloured light – blue, green, pink and yellow – during the night time hours," says a letter to Lambeth Council from planning agents DP9.

The letter continues: "It is proposed to install the lighting for early January 2013. The lighting forms part of the comprehensive branding set of 'signage' that will identify the ITV building is the home of ITV on the South Bank and act as a visual marker and way finder along the river frontage."

The London Studios complex is home to programmes including Daybreak, Lorraine and This Morning.

ITV is expected to introduce a new logo and visual identity for all its channels in the new year.

A 2010 application to install an illuminated ITV logo at the top of the tower was withdrawn.

Last autumn a giant pink bra was installed on the northern face of the tower.