United Reformed Church minister Peter Stevenson has presented a copy of his book on Jesus' miracles to Mayor of Southwark Cllr Althea Smith. 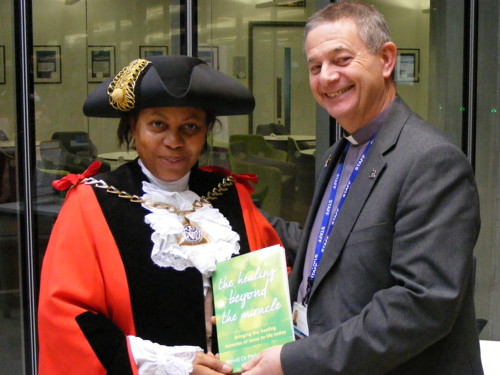 The presentation of the paperback, The Healing Beyond The Miracles: Bringing the healing miracles of Jesus to life, took place on Thursday at Southwark Council's Tooley Street office building where Dr Stevenson serves as chaplain to the authority's staff.

Among those present were members of Peter Stevenson's Crossway church in New Kent Road. The occasion followed launch events in Coventry and Crawley.

“The test of healing is whether it brings the person closer to God, not whether the healing makes them well,” writes Dr Stevenson. He then asks: "But what of those who attend the person seeking the healing?

"How does the miracle of healing affect them? For the one person who seeks healing there are a great many who hope and pray for the cure. In what respect does healing heal the friends, neighbours and observers of the one being healed?"

The book seeks to investigate and reflect upon the healing beyond the miracle as seen in the examples of Jesus and the effect upon those who witnessed the event.

"What was the reaction of the four attendants whose friend was healed after they lowered him through the roof of a house where Jesus was speaking?" continues the author. "Where was Peter’s wife when her mother received healing? How did Jairus respond to his daughter being made well again?

The book employs reader-response criticism to seek a plausible hypothesis in suggesting the effect of Jesus’ healing miracles on the onlookers and witnesses to the event.

"This book is for those wanting to take a fresh look at an aspect of Jesus’ ministry and consider how healing beyond the miracle can encourage our journey of faith in this age," says Peter Stevenson whose research involved a sabbatical and more recently devoting one day a week to writing.

The minister, who was appointed to Crossway United Reformed Church in 2009, is also chaplain to the Globe Academy.

"Peter Stevenson’s new book is a blend of scholarship, imaginative reflection and grounded engagement, revealing that the author is in fact a careful thinker, a preacher and a pastor," says former London South Bank University chaplain Dr Howard Worsley. He describes the book as "a most accessible work" which he wishes that he had written.

• The Healing Beyond The Miracles: Bringing the healing miracles of Jesus to life by Peter Stevenson (Onwards & Upwards; £6.99)