Plans for the transformation of the Queen Elizabeth Hall, Purcell Room and Hayward Gallery at Southbank Centre have been revealed. 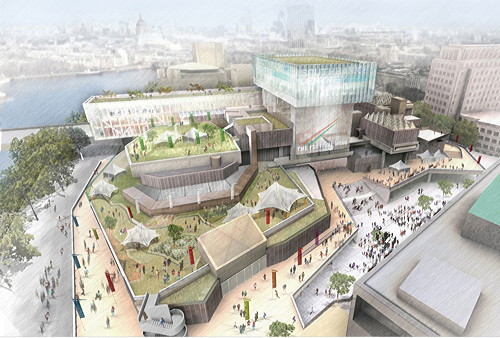 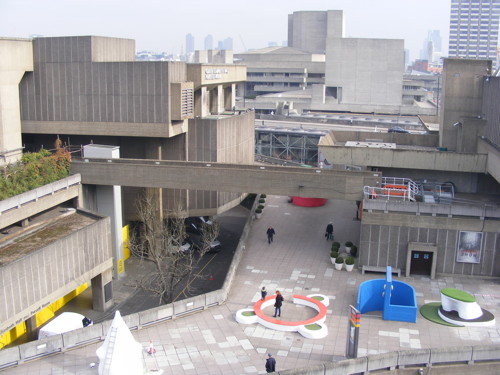 Described by artistic director Jude Kelly as "unashamedly ambitious", the revamp will cost more than £100 million and will take two to three years to complete once planning permission is granted and funds have been raised. £20 million from Arts Council England will provide a starting point for further fundraising.

The 1960s concert halls and art gallery will in future be known collectively as the Festival Wing of Southbank Centre.

The proposals, by architects Feilden Clegg Bradley Studios, include a new glass pavilion, a new central foyer and a new building alongside the southern approach to Waterloo Bridge.

The new central foyer will provide a common circulation space for visitors to the Hayward Gallery, Queen Elizabeth Hall, Purcell Room and potentially a new entrance to BFI Southbank. It will also offer new entrances to the Southbank Centre complex from Waterloo Bridge.

The most striking element of the proposals is the glass box above the foyer which will be used for orchestral rehearsals by day and corporate hospitality by night. The new building will be roughly the same height as City Hall.

Building on the success of the current rooftop garden, greenery will be a prominent feature of the Festival Wing's open-air spaces.

The Poetry Library, currently in the Royal Festival Hall, will move to a new literature centre alongside Waterloo Bridge.

A new heritage centre will include a permanent display relating to the history of the site, its buildings and the Festival of Britain.

Plans to move the South Bank skatepark to a new site underneath Hungerford Bridge and to fill its current location in the Queen Elizabeth Hall undercroft with shops and restaurants are likely to provoke controversy.

Asked about the criticisms sometimes levelled at the centre for the range of chain restaurants it hosts at the Royal Festival Hall, Jude Kelly said: "We believe that artistic endeavour and entrepreneurship can flourish side-by-side and profit from one another."

Work is scheduled to begin in autumn 2014 and Southbank Centre is considering the construction of a temporary venue on the Hungerford Car Park to host some of the artistic programme displaced from the QEH and Hayward complex by the building works.

The plans have been welcomed by leading local political figures.

Cllr Lib Peck, leader of the Lambeth Council, said: "Southbank Centre has made great strides in recent years to reach out to the local community in Lambeth and this exciting project has so many great elements to it which will benefit local people."

Kate Hoey MP added: "Southbank Centre has played a leading role in helping to transform the South Bank into London's top destination and this project will make the South Bank one of the world's most vibrant areas for children, families, the young and elderly as well as tourists."

The Twentieth Century Society, which has repeatedly called for the QEH complex to be listed, has yet to decide its formal response to the proposals.

"It would have a major impact on the setting of the existing buildings, and require demolition of some elements.

"In particular, the siting of the glass pavilion above the newly enclosed space between the Hayward Gallery and the Queen Elizabeth Hall would be a very significant intervention."

The proposals will be on show in the foyer of the Royal Festival Hall from Thursday 7 March.

There will also be an opportunity to learn about the plans for the Festival Wing at Waterloo Community Development Group's next meeting on Wednesday 20 March.