Members of the public were admitted to Southwark's CCTV control centre for the first time when pupils of the Walworth Academy toured the facility at Southwark Police Station. 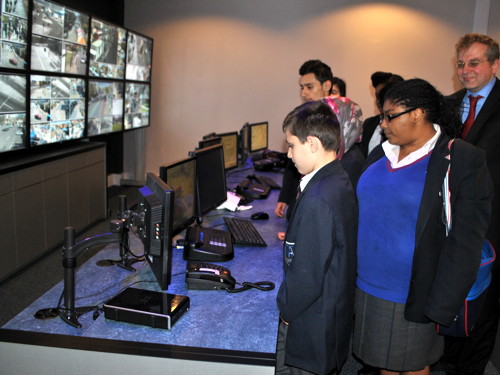 The students were accompanied on their visit to the Borough High Street police station by Cllr Richard Livingstone, cabinet member for finance, resources and community safety and Jonathan Toy, the council's head of community safety.

"After the tragic deaths of two young men on the Aylesbury Estate last year, we have carried out a lot of work to make the estate safer, including installing the new CCTV cameras," said Cllr Richard Livingstone.

"We decided to invite pupils of Walworth Academy that also live on the estate to see the cameras in action so that they could learn how they would help. It was also a good opportunity to hear their views on what the council should be doing to protect them from crime."

13-year-old Tyrese Augustus said: "I feel safer knowing that there are cameras in my local area and that people are actually watching what is going on.

"I'm also happy to have fed into talks about community safety in my area too. I hope positive changes can be made because of my input."

Casey Asota, aged 15, added: "I really enjoyed the visit and was surprised at how advanced the cameras are.

"It definitely makes me safer knowing that if something bad does happen, there's a high chance that the criminal will be caught."

Southwark currently has 160 public space cameras around the borough and access to more than 70 Transport for London cameras.