Extra floors for South Bank skyscraper: 30 to 36 to 41 storeys

The developers converting Richard Siefert's King's Reach Tower into luxury flats have applied to Southwark Council to add eleven floors to the top of the 30-storey building. 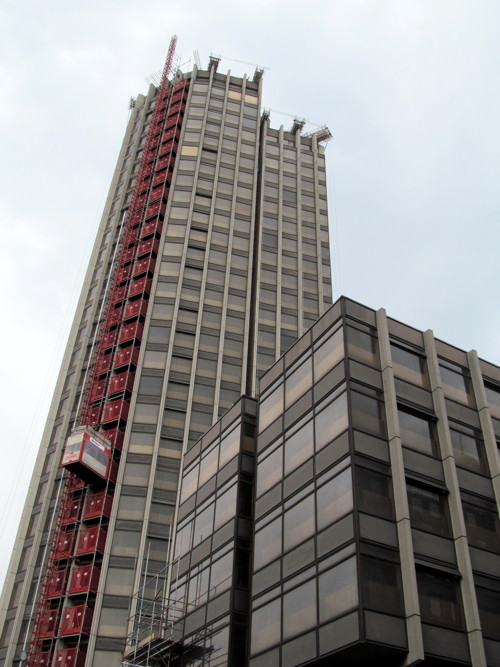 Work is already under way at the South Bank Tower

The Saudi-backed development consortium won the backing of Southwark councillors in 2011 for the conversion of the former IPC Media offices to residential use and the erection of a six storey extension.

Now they have applied to Southwark Council (13/AP/1403) to add a further five storeys to the tower, taking the height to 41 storeys and adding another 18 high-rise apartments.

Architects Kohn Pedersen Fox claim that the existing 1972 tower "represents a truncated version of [Richard] Seifert’s original design intent" and that the extra 11 floors are "intended to maximise the potential of the existing building structure and re-establish an elegant vertical proportion for the tower within the city skyline".

The architects also claim that the extra floors will improve the tower's "slenderness ratio" without competing visually with the 50-storey skyscraper planned for One Blackfriars.

The extra floors will make the top of the tower visible in some views from the courtyard of Somerset House – a move which is likely to lead to protests from English Heritage and Westminster Council.

The developer is expected to make an extra in-lieu payment to Southwark Council to make up for the absence of any on-site affordable housing. A payment of Ł22 million has already been made in respect of the overall scheme.

Luxury homes in the new development have already been marketed for sale in Hong Kong and Singapore.