One Blackfriars: 50-storey tower of luxury flats gets green light

New plans for a 50-storey tower - with 274 private apartments and no on-site affordable homes - at the southern end of Blackfriars Bridge have been approved by Southwark Council. 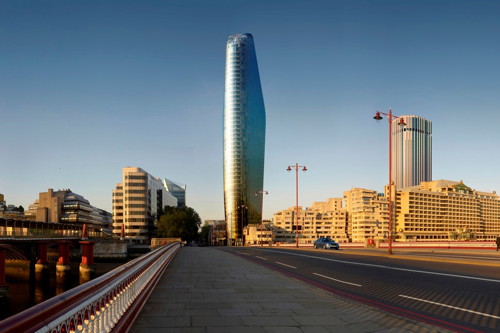 Five years after it was first approved, the latest version of Ian Simpson's One Blackfriars tower has been given the green light by Southwark councillors 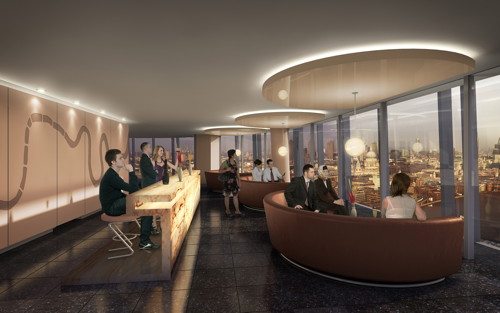 Revised plans for the high-rise scheme for the site bounded by Blackfriars Road, Upper Ground, Rennie Street and Stamford Street were approved by Southwark's planning committee on Tuesday night.

The tower, designed by Ian Simpson, was first approved by Southwark councillors five years ago when it was known as the Beetham Tower and was intended to house a luxury Jumeirah hotel.

Objections from English Heritage and Westminster Council led to a public inquiry and the scheme was finally granted planning permission by then communities secretary Hazel Blears in March 2009.

After Beetham and its Russian partner Mirax hit financial difficulties the site was put up for sale and was acquired by St George – part of Berkeley Homes – who have kept the Simpson design but replaced the high-rise hotel with luxury homes.

The new proposal involves the erection of three buildings including the tower.

There will be a six-storey hotel in Rennie Street with a shop on the corner of Stamford Street.

A podium building will be on the corner of Stamford Street and Blackfriars Road where the present slip road wil be removed to provide a wider pavement.

Architect Ian Simpson has reconfigured the ground plan allow for a public square with trees to be included at street level.

Ian Simpson, addressing the meeting, claimed that his building would "undoubtedly be a future icon and gateway to Southwark".

The main arguments during the debate turned on the removal of shared ownership housing in Rennie Street which had been a feature of the first scheme. All 274 apartments including family units will now be private flats. Developer St George claimed that a payment of Ł29 million to build council housing elsewhere was the best "economic outcome" in the present exceptional economic circumstances.

But Cllr Adele Morris, in whose ward the site falls, said: "How many 'exceptionals' does it take for it not to be exceptional any more?"

In a break with previous policy, Southwark's Labour administration has been happy to accept in-lieu cash contributions from developers anxious not to provide affordable housing in their riverside developments. The council will pool contributions such as the Ł29 million from One Blackfriars, the Ł22.4 million from King's Reach, Ł10 million from Potters Fields and Ł9 million from Neo Bankside to build new council homes elsewhere in the borough.

"This is an incredible amount of money and goes to show the great benefits for Southwark's residents in working proactively with private developers to drive forward investment despite a backdrop of recession," said Cllr Peter John, leader of Southwark Council, on Wednesday.

"It will go some way to deliver homes the capital desperately needs, across all tenures, and will welcome in a further economic boost to the already-thriving borough of Southwark."

Looking at the public gallery at Tuesday's meeting Cllr Adele Morris added: "I am very conscious that this room is full of consultants and developers...a room full of people here thinking 'They have got away with this; we are all going to get away with it too'."

Cllr Morris questioned why the developers were paying the equivalent of 29 per cent rather than 35 per cent for social housing provision when the original number of flats had been tripled.

She suggested that the developers were going to make significantly more money with the new scheme where some flats would cost Ł2.5 million. The construction costs had not changed hugely since the first scheme.

"I think we are providing as much as we can," said a St George London South representative. "We have gone through a very rigorous process with the district valuer." He added: "These are not inconsiderable sums. Simply put it is what we can afford."

While the original Beetham scheme included a public 'skydeck' at the top of the tower, this has been replaced in the latest proposals with a small 'viewing lounge' on the 32nd floor.

It was agreed that the lounge would be available for local meetings or SE1 residents to hold a birthday or wedding party at Ł50 for the first hour and Ł30 per hour thereafter. A business would pay a higher rate.

During a discussion on the viewing lounge Cllr Morris highlighted the Ł5.5 million stated value of the space as "being offset as a cost to the community" and wondered if this sum could not have been added to the affordable housing figure.

Objections to the height of the tower included Westminster Council's claim that the building would adversely affect the setting of the Houses of Parliament and Westminster Abbey world heritage site and local views of the River Thames. Both English Heritage and the Royal Parks Agency said that the scheme would impact on the protected views from St James's Park.

No objectors were present but Eric Bryan, representing nearby River and Rennie Court residents, welcomed the proposals which he described as an improvement on the first plan.

If the planning application is approved by the Mayor of London, work will start at the end of next year with completion expected by 2018.