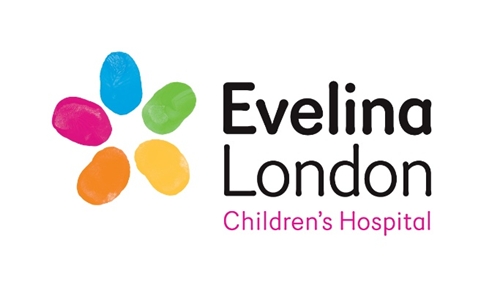 The new Evelina logo which was unveiled this week

Mr Cameron's son Ivan, who died in 2009, was treated at the Evelina.

"Our National Health Service is one of the most precious institutions we have," said the PM.

"We all know it, because all of us have been touched by it. I will never forget the care my son Ivan received and the inspirational people who helped Sam and me through some of the most difficult times.

"The consultants, the community nurses, the care team – every one of them became part of our lives. When you have experienced support and dedicated professional care like that, you know just how incredibly special the NHS is."

Health secretary Jeremy Hunt, whose mother worked at St Thomas' Hospital, said: "Today, on its 65th birthday, we salute the consultants, doctors, GPs, nurses, healthcare assistants, porters, cleaners, receptionists, managers ... 1.3 million people who with their commitment and values make our NHS what it is.

"No other country in the world would make their health system the centrepiece of its Olympic ceremony – but we did it for a reason: it truly is one of our greatest and proudest achievements."

The ministers' visit to the hospital comes in the same week that it unveiled its new branding as the Evelina London Children's Hospital.

Dr Grenville Fox, joint clinical director, said: "We are proud to have taken this opportunity to incorporate London into our name which reflects our important role in treating children from not only our local community in south London but also south east England and further afield.
"Our patients not only helped choose our new name but also created our logo – this is their hospital."

While Cameron and Hunt were in the hospital the GMB union had organised a cavalcade of vintage ambulances across Westminster Bridge.