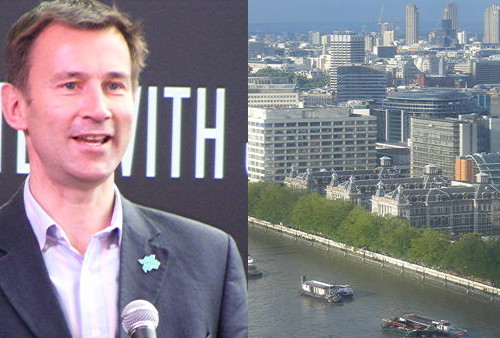 Mr Hunt, who moved to the health department from the culture, media and sport department earlier this month, was given a tour of St Thomas's Hospital last Thursday.

During his visit to the hospital he met some of the thousands of staff and volunteers who have been nominated by patients for going the extra mile as part of the national NHS Heroes scheme.

"I am delighted to have had the chance today to speak with patients and staff about their experiences," said the health secretary.

"This hospital has special significance for my family, as my mother worked here and one of my children was born here, but I have been reminded today of the invaluable work of staff and volunteers up and down the country.

"They are at the heart of the NHS and we can never praise them highly enough.

"We have received more than 3,000 NHS Heroes nominations so far, which shows just how highly the public regard NHS staff and volunteers. I would urge as many members of the public as possible to nominate their own NHS Heroes by 21 September."

During the visit Mr Hunt heard how improvements have been made to the ward for older people. He was told about special initiatives on nutrition, training for staff on what it is like to be an older person, and how nursing staff ensure patients who need extra care are well looked after.

He also met with a number of members of staff at St Thomas' who have been nominated by patients as NHS Heroes. The scheme, which was launched in July, aims to recognise the work of NHS staff and volunteers who go the extra mile.

Nominations can be submitted by filling in a short online form on the NHS Heroes website. The closing date for nominations is 21 September 2012.