Activists from the Unite trade union have held a demonstration outside the Hilton London Tower Bridge hotel calling on employers in the hospitality industry to pay their staff the London living wage of £8.55 an hour. 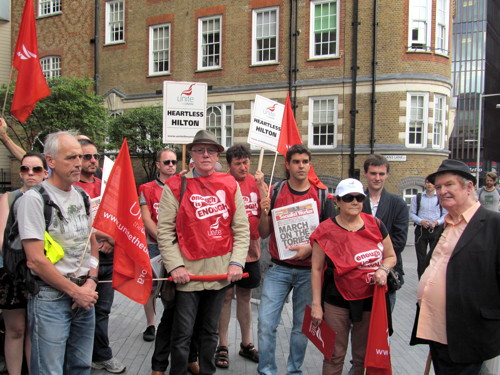 Unite staged the demo outside the Tooley Street hotel as it prepared to deliver its submission to an investigation by the London Assembly's economy committee into low pay in the capital at nearby City Hall.

The Unite submission said: "There are currently no employers within London's hospitality sector who independently endorse and pay their employees the London 'living wage'.

"Many of our members are forced to live on little more than the national minimum wage (currently Ł6.19p an hour). Many report suffering pay freezes, pay cuts and constant attacks on their terms and conditions of employment."

Unite regional officer Dave Turnbull said: "We believe that the 'living wage' would have a positive impact on the problems of high staff turnover and skill shortages that have plagued the sector for decades. It should not be forgotten that tourism/hospitality is the UK's fourth biggest industry.

"The adoption of the 'living wage' would enhance London's reputation as a world class tourist destination fit for the 21st century."

• We invited Hilton to comment on the Unite demonstration but the company had not responded by the time of publication.