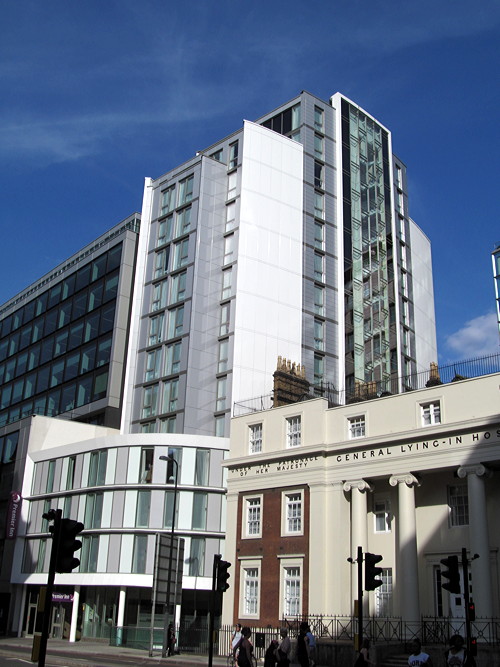 The clumsily named Premier Inn London Waterloo (Westminster Bridge) opened in March this year and incorporates the former maternity hospital as well as a new wing built on the site of an accommodation block for nurses.

It is this new building which has attracted the ire of Building Design and its readers: "The Premier Inn in Lambeth is a travesty in more ways than one – we shudder at its lumpen form and mourn the building demolished to make way for it," says the magazine.

The building was originally designed by the now defunct firm of Hamiltons, also responsible for Strata SE1 at Elephant & Castle which won the 2010 Carbuncle Cup.

The anonymous BD reader who nominated the Premier Inn for the award wrote that the new tower leaves the listed hospital building "sadly stranded in the arse end of the 21st century like some historic spaceship".

Other buildings on this year's shortlist include a controversial development alongside Oxford's Port Meadow.

The winner – to be picked by a panel of journalists and critics – will be announced on 30 August.

Is this the worst new building in Britain?