As local youth charity SE1 United celebrates its tenth anniversary, 54 intrepid cyclists this week completed a 54-mile bike ride to Brighton with the aim of raising £10,000 to secure the future of the charity's work. 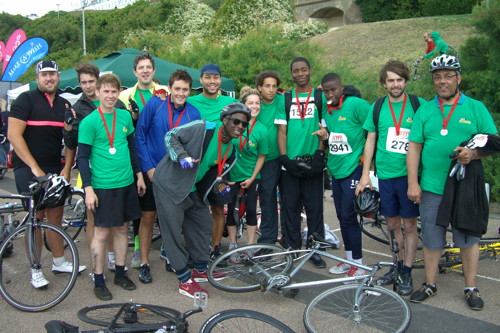 10 young people from the charity were among the group which completed the ride in between four to six hours.

Participants included a team of seven from Better Bankside, the local business improvement district, who completed the challenge on the organisation's trademark pink Brompton folding bikes.

“I cannot thank everyone enough for the support they have shown to SE1 United, raising money and helping to promote the needs of the young people in our community, helping to make sure that we can continue the important work that we do," said programme director Jacob Whittingham.

Based at Southbank Centre, SE1 United runs a range of projects to help local young people further their education and improve their employment options.

The charity has so far raised more than £8,000 towards its £10,000 target and donations can still be made online at https://mydonate.bt.com/events/se1peloton/98788