Mayor of London Boris Johnson has published an image showing how Blackfriars Road could be transformed by the construction of a new segregated cycle route. 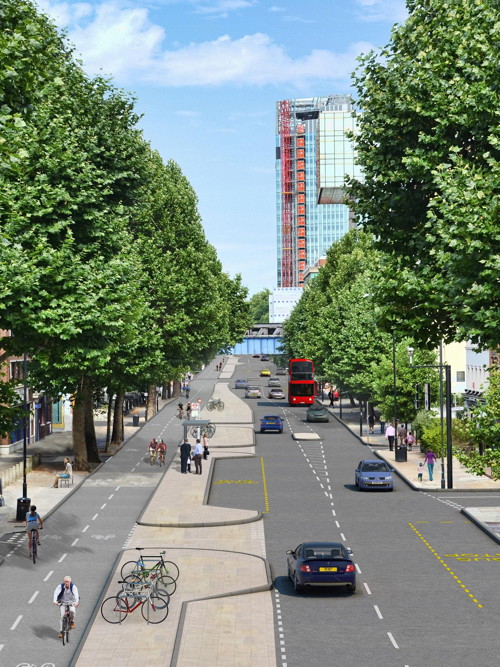 Launching an extension to a cycle route in east London, Mr Johnson announced plans for "a second substantially-segregated cycle superhighway through the heart of central London – adding a north-south segregated route to our already-announced east-west route".

He said: "I share people's impatience for change. We have taken the time to ensure that it is done properly – but that physical change is now under way."

City Hall confirmed that the new route will run from Elephant & Castle to King's Cross via Blackfriars Road and Blackfriars Bridge.

"It is planned to use a combination of full segregation and lower-traffic streets," said a spokeswoman for the Mayor.

The image of Blackfriars Road published by the Mayor's office shows a segregated cycle route created on the western side of the road with the space for motor traffic reduced to a single lane in each direction.

Northbound bus stops would be located on traffic islands between the cycle superhighway and the main carriageways.

The junction at the northern end of Blackfriars Bridge will be remodelled to provide an intersection with the proposed east-west superhighway from Barking to West London via Victoria Embankment.

Detailed designs for both routes will be published for public consultation in 2014.

Earlier this year Transport for London revealed that bicycles make up more than half of all northbound traffic crossing Blackfriars Bridge during the morning peak hours.

What do you think of the proposals?