The High Court has ruled that there are grounds to grant permission for a full judicial review of communities secretary Eric Pickles' decision not to hold a public inquiry into a controversial development at Waterloo. 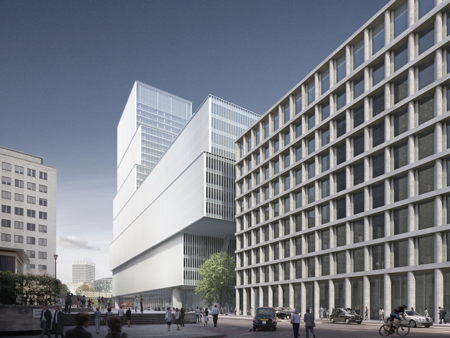 The proposed redevelopment on the Elizabeth House site in York Road

The scheme is opposed by Westminster City Council and English Heritage who claim that the new 29-storey tower will damage views of the Palace of Westminster from Parliament Square.

Despite receiving representations from Unesco, the UN body which runs the World Heritage Sites scheme, communities secretary Eric Pickles decided not to order a public inquiry into the scheme.

The City of Westminster had applied for permission to seek judicial review of Mr Pickles' decision, and on Thursday morning a High Court judge ruled that there were grounds for a full judicial review.

Cllr Robert Davis, deputy leader of Westminster City Council, said: "We are delighted at this development, because the council is committed to preserving the status of the Palace of Westminster as one of the world's most important and most recognised World Heritage Sites.

"As we have already proven in the Victoria area of London, you can create areas for jobs, growth and enterprise – but it does not have to be at the cost of risking the nation's heritage."

In a statement, the developers Chelsfield and London & Regional Properties said: "We note this outcome and remain very confident about the actual judicial review hearing itself.

"The Elizabeth House proposals have been thoroughly scrutinised by Lambeth, the Mayor of London and the secretary of state and each time they have reached the same conclusion, which is that there is minimal harm to views but significant benefits to Waterloo and to London.

"The site is specifically identified in policy as suitable for a tall building and the scheme will support 8,700 jobs. It will transform the public spaces around Waterloo Station used by tens of millions of people each year and see Ł60 million a year spent in the local economy in a part of London that has not shared in the growth in prosperity of recent times.

"At a time when economic growth is absolutely paramount and with the localism agenda strongly in place, it is regrettable that the Elizabeth House regeneration will now be delayed while this case is heard and we remain committed to seeing these benefits realised."

Cllr Lib Peck, leader of Lambeth Council, said: "This is extremely disappointing as it means further delays to a once-in-a-generation opportunity for jobs, homes and investment in the area.

"Lambeth Council believes the Elizabeth House development is absolutely consistent with the government's National Planning Policy Framework, it is fully supported by the Mayor of London and will bring considerable economic, social and cultural benefits to the area."

A public inquiry into the adjacent Shell Centre development – which was 'called in' by Mr Pickles – begins later this month.