New low-level traffic lights for cyclists are likely to be installed on Cycle Superhighway 7 at Elephant & Castle this year, following Government approval. 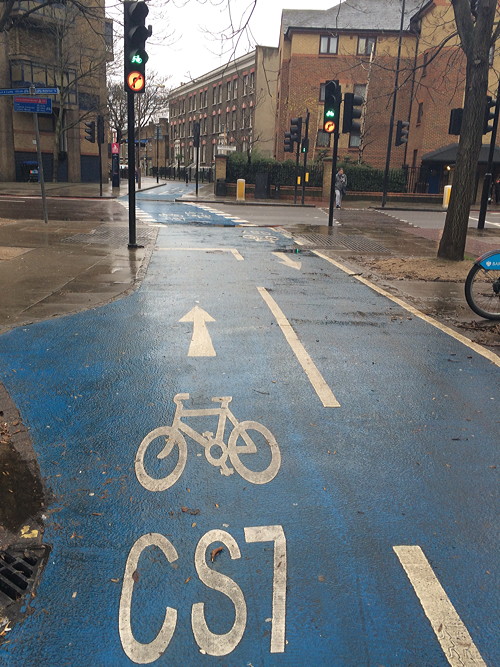 Transport minister Stephen Hammond announced last month that he was granting permission to Transport for London for the installation of the new lights which repeat the signal displayed on main traffic lights at the eye level of cyclists.

The first London junction to see the new lights will be the Bow roundabout in east London, but TfL has lined up another 11 locations where it wants to use the system.

The proposed locations for the low-level lights include the junctions where Cycle Superhighway 7 crosses London Road and St George's Road at the Elephant & Castle.

"Over the last few years we've worked very closely with Transport for London to deliver better infrastructure for cyclists. Transport for London are working hard on proposals to make cycling safer and these low-level lights mean that cyclists will have dedicated traffic lights that give them the information they need.

"There is always more that we can do and there is a lot of research underway into further measures that we can look at."

Mayor of London Boris Johnson added "This is very good news for cyclists in London, and across the country.

"Just one of a number of new safety measures we've been discussing with the government, this new piece of infrastructure forms a key element of our cycling vision for London.

"We look forward to continuing to work together on many more measures to help make cycling even safer, more attractive and convenient for Londoners.

Leon Daniels, managing director of surface transport at TfL, said: "Low level cycle signals are commonplace in certain parts of Europe and we are keen to make them commonplace in London.

"Working closely with the Department for Transport, we will work to have these on-street during January 2014, and should the technology prove to be successful, further trials will be carried out across London throughout 2014."