Waterloo Foodbank: usage up by 136 per cent in a year

A 'food mountain' was assembled on the concourse of Waterloo Station on Good Friday by members of South Bank churches in support of the local foodbank. 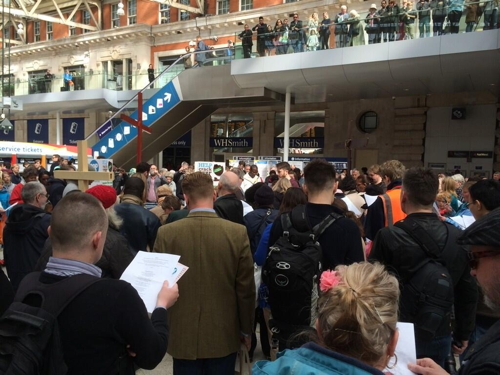 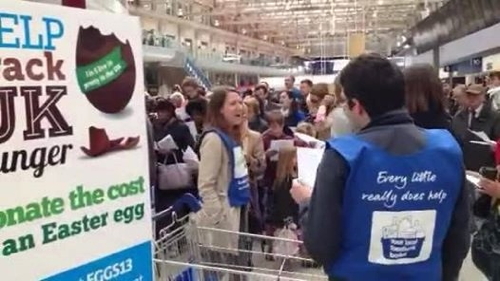 At 11am on Good Friday members of local churches burst into song at Waterloo Station for the second annual ecumenical Pop-up Church event.

Local Christians sang 'Lean on Me' and 'Amazing Grace' as surprised rail passengers looked on.

More than 180kg of food was collected for the Waterloo Foodbank during the flashmob-style event.

"Nationally, there has been a shocking 51 per cent rise in the number of clients using foodbanks in the last year," said Revd Steve Chalke, chair of the local Churches Together group.

"But here, in Waterloo, we've seen an increase in usage of a staggering 136 per cent, and as a community we feel that we needed to act.

He added: "Through the 'Pop-Up Church', our local churches are offering tourists, commuters and members of the public the chance to support the vital service which is offered by our local foodbank.

"We know that on Good Friday people all over the country attend church services but this event is church in the community, doing exactly what it should be; serving the most vulnerable and needy."

In the last year 2135 people, including nearly 800 children, have received supplies from the foodbank totalling more than 16 tonnes.

Waterloo Foodbank manager Nathan Jones said: "Rising living costs, low pay and welfare problems all compound together to make life impossible for the most vulnerable families in our community.

"We call on the Government to take urgent action to ensure that no one in the UK is denied their most basic right to sufficient and adequate food instead of leaving it to the churches to mind the gap that the holes in their policies leave."

Waterloo Foodbank is coordinated by Oasis Church Waterloo and is currently based at Lambeth Mission & St Mary's during building works to create new facilities for Oasis Academy South Bank.

Through the South London Procurement Network, local electricians Fulcher Edwards have supported the Waterloo Foodbank by placing a collection box in their staff kitchen.

Claire Fulcher-Powell said: "Fulcher Edwards has been based in SE1 for the last 22 years so we are always happy to support local charitable initiatives that will help the community.

"We wanted as many people as possible to have a positive start to 2014 – and to know that people do care when times are tough.

"All of our team hope that our food box contribution made a difference, and we will happily take part again this year."