12 hours of non-stop carols to raise funds for foodbank

Volunteers gathered under the Christmas tree at Waterloo Station on Saturday to take part in a 12-hour 'carolathon' to raise funds to meet the running costs of the local foodbank. 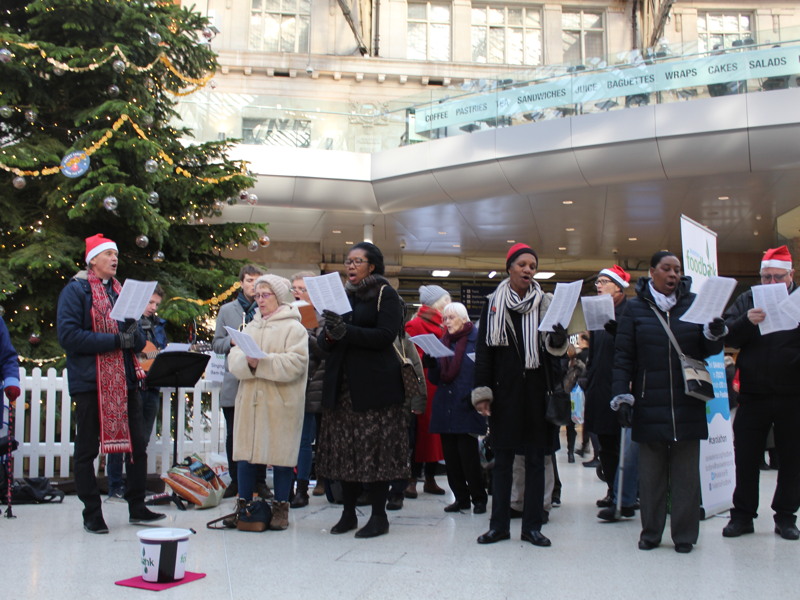 Waterloo Foodbank – based at the Oasis Centre and supported by many local churches and organisations – says that demand is rising.

Between September and December this year the foodbank fed around 40 per cent more people than in the same period in 2016.

The Waterloo Foodbank costs around Ł16,000 per year to run, which covers everything from shelving and weighing scales to insurance and the manager's salary; the Foodbank has one part-time employee, and the rest of the work is done by a team of more than 50 volunteers.

"This is our one big annual fundraiser; without the Carolathon the foodbank simply wouldn't be able to continue to support those in our community who are most in need," said foodbank manager Rebekah Gibson.

"Any support given is gratefully received!"

The foodbank is not currently accepting donations of food as it has received many contributions in the run-up to Christmas but it is likely to need more support in the new year.

Waterloo Foodbank is based at the Oasis Centre and has branches at St John's Waterloo and St George the Martyr church.