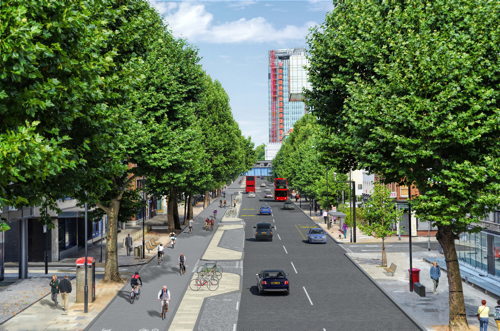 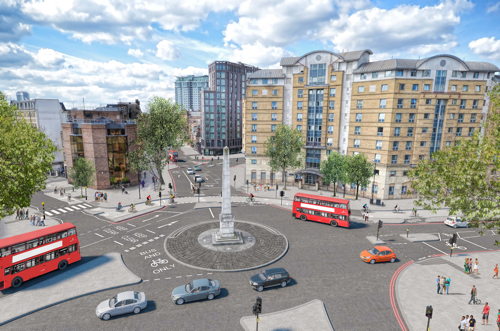 Last year the Mayor of London announced plans to completely redesign the road layout of Blackfriars Road to create a new cycle route and now full details of the proposals have been published.

Subject to the results of public consultation – which runs until 12 October ^ – work will start early next year and the route will open in March 2016.

"Bikes already make up 24 per cent of all rush-hour traffic in central London – hundreds of thousands of journeys every day that would otherwise be made by car or public transport," said Boris Johnson, Mayor of London.

"Because this isn't just about cyclists. Getting more people on to their bikes will reduce pressure on the road, bus and rail networks, cut pollution, and improve life for everyone, whether or not they cycle themselves."

From Elephant & Castle the superhighway would run along St. George's Road, Lambeth Road, through St George's Circus, along Blackfriars Road and cross Blackfriars Bridge before connecting to the proposed East-West Cycle Superhighway on the north bank of the River Thames. It is planned to then continue to King's Cross using New Bridge Street, Farringdon Street, Farringdon Road and quieter backstreet roads.

The proposals include a new layout for St George's Circus with a smaller paved area around the obelisk and the loss of the flowerbeds tended by local guerrilla gardeners.

"This is a significant investment from Southwark Council and TfL which will transform Blackfriars Road and create a mile of high quality pedestrian and cycling facilities, which will link the river to the Elephant & Castle," said Cllr Mark Williams, Southwark Council cabinet member for regeneration, planning and transport.

"The proposals connect a number of exciting developments along Blackfriars Road directly into the planned improvements at the Elephant & Castle, furthering our vision to create a vibrant mixed use destination with the highest quality of public realm."

Separately, Southwark Council is consulting on plans for the new Quietway 2 cycle route from Greenwich to Waterloo, which will cross the Blackfriars Road cycle superhighway at the Webber Street junction.

^ After this article was first published, the consultation period was extended until 9 November