The City of London Corporation has been forced to backtrack on plans to charge a higher rent to tenants of a new social housing block next to Tower Bridge. 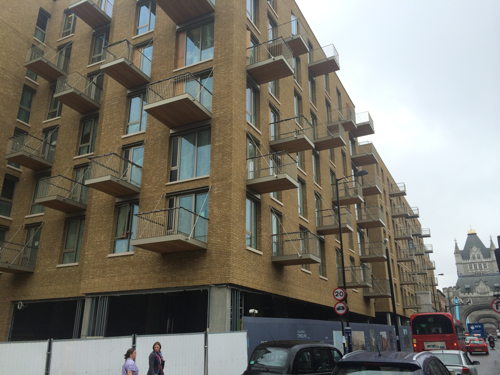 Horace Jones House is part of the One Tower Bridge development

Horace Jones House is part of the Berkeley Homes One Tower Bridge development.

Named after the architect of Tower Bridge, the new block occupies land owned by the City of London Corporation on the southern approach to the bridge.

The capital value of the block of 43 brand-new flats has been estimated by Guildhall officials at £43 million – an average of £1 million per home.

The City of London Corporation had planned to take advantage of the Government's introduction of a new category of 'affordable rent' to charge tenants 40 per cent of the market rent for the new homes – but this suggestion has been knocked back by Southwark Council.

In June this year the City estimated that market rents for the two-bedroom flats at Horace Jones House would be between £650 and £850 per week.

While Southwark Council accepted a £10 million payment in lieu of any affordable housing on the land it owned at the former Potters Fields coach park, the City of London Corporation opted to build 43 homes for rent on part of its landholding.

The City of London Corporation admits that even with the lower rents, its income at Horace Jones House will still exceed its projected expenditure and the block will be a net contributor to the housing revenue account.

The Square Mile authority had argued that charging the higher rents would allow it to fund other projects, would diversify its portfolio of affordable homes and increase housing provision for Londoners on medium incomes.

However Southwark Council officers pointed out to their Guildhall counterparts that charging higher rents would require a variation to the planning permission for the scheme and indicated that support for such a change would not be forthcoming.

"In line with our own priority to provide much needed affordable homes in Southwark we did discuss this issue with the City and we welcome their acceptance of the need to provide true affordable rented homes in partnership with the council," said Cllr Mark Williams, Southwark's cabinet member for regeneration, planning and transport.

"We look forward to continued working with them on their other developments within the borough."

In another controversial move, the City of London plans to offer fixed-term five-year tenancies rather than lifetime tenancies to new tenants.

Existing holders of a lifetime tenancy will retain this if they move to Horace Jones House.

Leading members of Southwark's ruling Labour group have previously spoken out against the use of short-term tenancies for social housing.

We asked the council about the City's use of time-limited tenancies at Horace Jones House.

Cllr Williams replied: "We were not aware of their intention to offer fixed-term tenancies but our officers will be continuing to speak with them on this matter.

"Our policy is to encourage affordable housing providers working within the borough to offer life-time tenancies to existing social tenants. As such, we will continue to encourage all of our partners to adhere to this policy."

The City Corporation says that existing tenants of its other estates have shown "considerable interest" in moving into Horace Jones House and the new tenants will be moving in to their homes in the new year.

In the same development Berkeley Homes is currently marketing a four-bedroom penthouse for sale at £15 million.