Southwark Council has denied claims made by Transport for London and Development Securities that it has agreed a deal to develop land it owns near Southwark Underground Station. 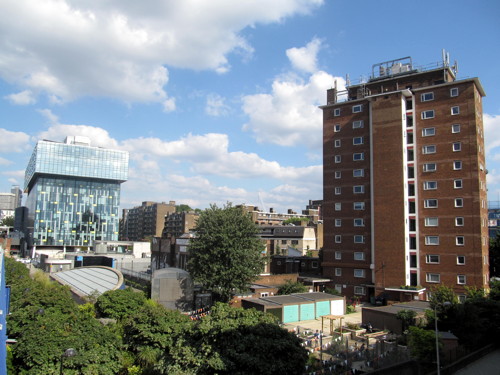 On Monday Transport for London and Development Securities announced plans to build more than 300 homes above and around Southwark Underground Station.

TfL and DevSec both claimed that the proposed development would include land owned by Southwark Council – but the authority has since denied that any deal has been done.

The development site is next to Styles House, a block of council flats at the corner of The Cut and Hatfields.

Questioned by local residents at Thursday's South Bank Forum, Southwark regeneration boss Cllr Mark Williams said that Monday's media reports of a deal had come as a surprise to him.

"Southwark Council has not agreed any deal in relation to its land holdings adjacent to Southwark Station," said Cllr Williams.

"The council has made a commitment to be honest and open with local residents who could be directly impacted by any scheme.

"If Development Securities approach the council with a proposal we will consult fully with local residents on that proposal prior to any formal decision being taken by the council's cabinet."

The council is writing to nearby residents to make clear that there has been no agreement.

It's not the first time that the council has had to write to residents at Styles House to allay their fears about the next-door development site.

In 2013 the council apologised to Styles House residents after plans to sell off some of their homes were accidentally published on the authority's website.