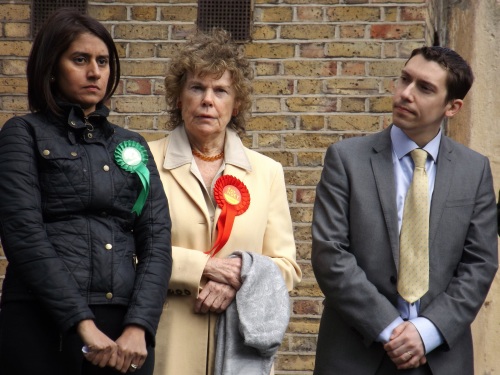 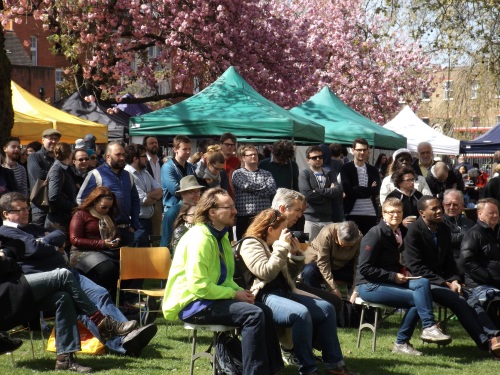 The audience in the churchyard

"I think what has happened along the South Bank and along Vauxhall has been shocking," said Kate Hoey who has been the member of parliament since 1989.

"We have lost out on so much value of that land. It has not gone into affordable housing but private developers.

"I want to see a top band of council tax brought in for all those multi million developments along the river."

The sitting MP was speaking during the outdoor hustings on Saturday in St Mark's Kennington churchyard.

"Walk in the footsteps of those who won democracy and freedom of elections," said vicar Canon Steve Coulson in welcoming candidates and electors.

He reminded the crowd that the church stood on Kennington Common where the Chartists had gathered in 1848.

Kate Hoey said that Vauxhall was one of only ten constituencies that had ten candidates.

"It shows the diversity of the area," she observed.

She said that no government had given priority to affordable housing but thought that the Labour Party was now committed to revitalising the housing sector.

She added that she wanted to work with other parties once elected and not always be tribal.

"Just because it's a Labour council it does not mean that it always does the right thing.

"I hope that you will think that the next Labour government will bring about a fairer country and I hope that here in Vauxhall you will allow me to continue the work I have done over the last number of years."

Liberal Democrat Adrian Hyyrylainen-Trett said that he lived in the north of the borough and believed in an open and free society. He did not agree with the coalition's policy on tuition fees.

He said 35 percent affordable housing was not enough in new developments.

He also condemned the demolition of houses and the eviction of people who had lived in them for years. He said that young people must be able to get on the housing ladder at an earlier stage.

Conservative James Bellis thought than his party could win outright.

Green Gulnar Hasnain said that the Greens believed in change and could hold government to account.

Louis Jensen, Cannabis is Safer than Alcohol, said that politics was going in a different direction. All he wanted was a better world to live in and be able to do what we want as human beings.

Pirate candidate Mark Chapman and Whig Waleed Ghani both conceded that they did not expect to win. But the Whig would go into coalition with the Pirate Party and Left Unity candidate Simon Hardy.

Danny Lambert of the Socialist Party of Great Britain said he did not really want to be the MP.

"I am just putting forward the case for socialism."