Blackfriars Road was closed to traffic on Tuesday afternoon due to a protest by taxi drivers outside Transport for London's Palestra offices. 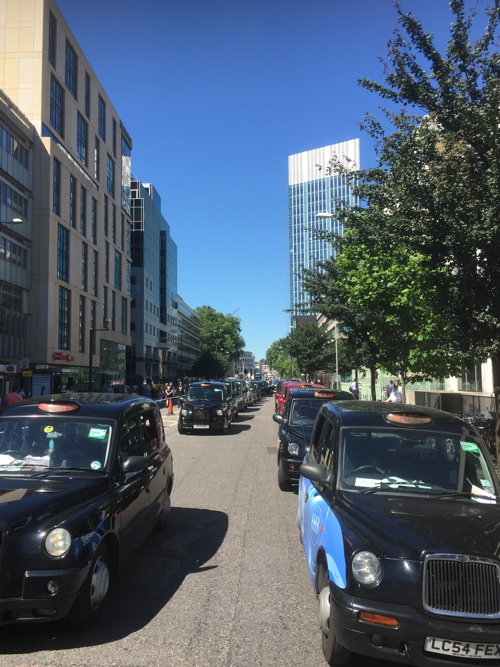 As well as its surface transport HQ at Palestra, TfL has recently moved the staff who deal with taxi and minicab licensing into new offices at 230 Blackfriars Road.

"As the 'gold standard' for taxi drivers worldwide, we pride ourselves on keeping London moving," said Len Martin, chair of the United Cabbies Group.

"For our drivers to shut down the city shows how bad things have got. Many of our members now work for less than the minimum wage.

"It took four months for one member, Claire, to get her licence renewed. It used to take four days. She was unemployed throughout with a cab sat on the drive.

"But this demonstration isn't just about us – it's about passenger safety too. A recent newspaper investigation demonstrated how an Uber driver was able to pick up a paying customer, despite having provided fake insurance papers to the company.

"It's rumoured TfL officials called on Sir Peter Hendy to revoke Uber's license as a result, but he declined to do so. This raises serious questions about the impartiality of those at the top.

"We're not against competition: we expect fair competition and the law of the land to be enforced.

"We already know the Mayor of London's opinion: We can 'eff off and die'.

"We're not going to die, but as soon as a parliamentary inquiry is launched, future industrial action will be cancelled."