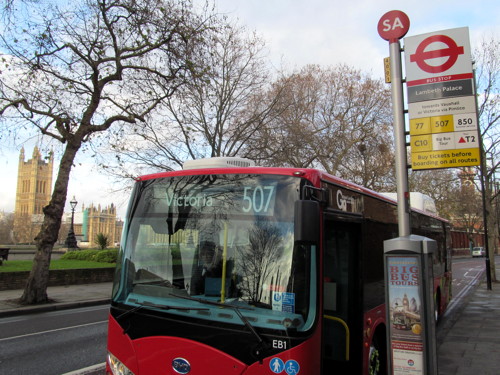 Go-Ahead London General runs route 507 which links Waterloo Station with Victoria and route 521 which runs from Waterloo to London Bridge Station via Holborn.

Two Chinese-built electric buses have operated on the routes since 2013 and a further two buses from Spanish firm Irizar have this month joined the fleet.

At Mayor's Question Time on Wednesday Mayor of London Boris Johnson revealed that all diesel buses will be withdrawn from two routes next year.

"I can announce today that we are stepping up our electric bus fleet by introducing a further 51 all-electric vehicles in the autumn of next year on routes 507 and 521," said Mr Johnson.

"That means there will be over 70 zero tailpipe emission vehicles in the capital in just over one year's time.

"There are currently 10 vehicles in the fleet. That will grow to 17 in September and 22 in October when the first double deck electric bus ... arrives on our streets.

The buses used on routes 507 and 521 are currently based at Waterloo Garage in Cornwall Road and Mandela Way Garage. It is unclear where the new electric fleet will be stationed.