A Lambeth Labour councillor has published the results of an opinion poll he commissioned to gauge Londoners' views on the proposed Garden Bridge. 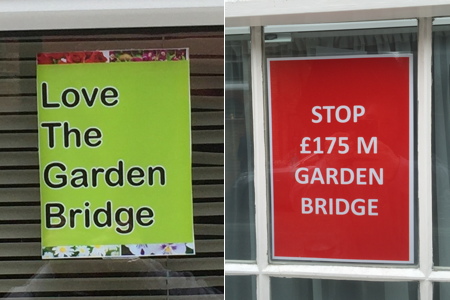 Cllr Kevin Craig – previously a supporter of Thomas Heatherwick's Garden Bridge – is one of the three Labour councillors for Bishop's ward, which covers the South Bank and Waterloo.

Cllr Craig – who runs his own lobbying and public relations company – commissioned the opinion poll from Populus.

The new poll of more than 1,000 Londoners found 57 per cent to be indifferent or opposed to the Garden Bridge: 36 per cent said they oppose it outright; 19 percent neither support or oppose and two per cent were undecided.

However, supporters (43 per cent) still outnumbered those expressing clear opposition to the bridge (36 per cent).

More than half of those questioned for the poll opposed plans to shut the bridge to the public for fundraising events.

The Populus poll follows an earlier survey carried out by ComRes on behalf of the Garden Bridge Trust this summer which claimed 78 per cent support for the bridge among Lambeth and Westminster residents.

"Londoners do not overwhelmingly support this bridge like the Garden Bridge Trust claims," said Cllr Craig.

"The more Londoners know, the less they like it. 43 per cent is not enough to justify £60 million of public money.

"The Garden Bridge Trust need to stop claiming that three quarters of Londoners support it. Londoners also object to a bridge being closed to the public at all and especially for tiny private parties.

"Over recent months I have lost all confidence that I had in the Garden Bridge Trust and its plans for a Garden Bridge. There are many reasons for this.

"In addition – at very recent public meetings the Garden Bridge team have shown themselves unable to competently answer questions on public safety and on key aspects of design.

"They have been unable to give satisfactory answers on the procurement process around the Garden Bridge's design and construction and they haven't given clear information on business plans and finances that at the outset of this process they said would be forthcoming."

Although Cllr Craig was initially in support of the bridge, his ward colleagues Ben Kind and Jennifer Mosley have been longstanding opponents of the scheme.

The new opinion poll comes just a day after Lambeth Council revealed it had called a halt to talks with the Garden Bridge Trust over the use of land on the South Bank for the construction of the footbridge.

Vauxhall MP Kate Hoey – who has consistently expressed the view that the bridge will never be built – said: "This poll shows that the Garden Bridge Trust has got it wrong over public support for their project. There was no public money gifted to the London Eye yet it has become the most successful tourist attraction in London.

"It is now time for the Garden Bridge Trust to recognise they need a complete rethink and start listening to those who have urged a different approach to location, costings, public investment and public benefit."

The Garden Bridge Trust maintains the bridge can be completed by summer 2018.

The bridge is due to be be made in parts at Cimolai's factory in Italy, shipped to Tilbury in Essex, where it would be part-assembled before it is brought up the Thames in large segments to be lifted into place in 2017.

The Garden Bridge design team, led by Thomas Heatherwick, visited the factory in Pordenone on 10 September to review progress made on the production of samples and selection of construction materials for the bridge.

"It was exciting to see this first full-scale prototype," said Thomas Heatherwick.

"We're making great progress especially on the welding and details of the bridge's skin, and soon we'll be seeing the colour of the final copper-nickel finish."

This week representatives of Bouygues Travaux Public – the French firm which is part of the joint venture with Cimolai which is expected to be awarded the contract to build the bridge – addressed local residents at a Waterloo Community Development Group meeting to outline plans for lorry movements and other works on the South Bank.