An ecumenical party of Christians was one of the first groups to pass through the holy door at St George's Roman Catholic Cathedral. 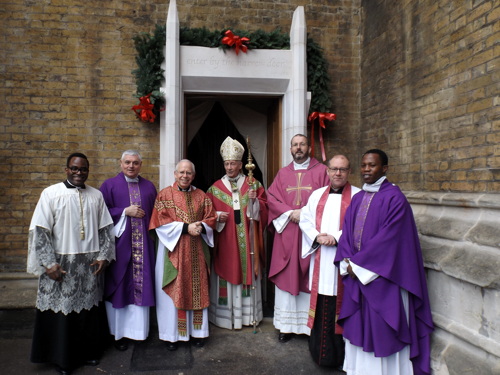 The official opening of the holy door in December last year

The door was officially opened in December by the Roman Catholic Archbishop of Southwark Peter Smith but building work has only just been completed.

The group visiting on Saturday consisted of Southwark and Lambeth church members who were taking part in the annual walk during the Week of Prayer for Christian Unity.

Clergy in the party included Canon Mandy Ford from the Anglican Southwark Cathedral and Fr Christopher Pearson of the Church of the Most Precious Blood in Borough.

Pope Francis designated 2016 to be a special Holy Year of Mercy with the traditional holy door to represent a new opening of God's mercy to every heart.

Holy doors are normally confined to Rome and great shrines and only opened every 25 years. The last time was Millennium year 2000.

The walkers were welcomed by the Dean of St George's Cathedral Fr Richard Hearn who led them through the Holy Door. Once inside the cathedral the party said aloud the Lord's Prayer and Jubilee of Mercy prayer.

Visits were made to the cathedral's Oscar Romero and Mother Cabrini shrines.

Southwark's Holy Door will be open for visitors every weekend until Sunday 13 November.

Fr Hearn was the guest preacher at Choral Evensong at the the Anglican Southwark Cathedral on Sunday.