A new shrine to St Frances Cabrini, patron saint of migrants, has been dedicated by the Archbishop of Southwark at St George's Cathedral. 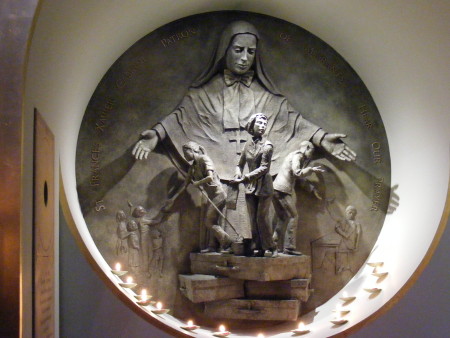 The new shrine was designed by Theodore Gillick, James Gillick and Gabriel Gillick 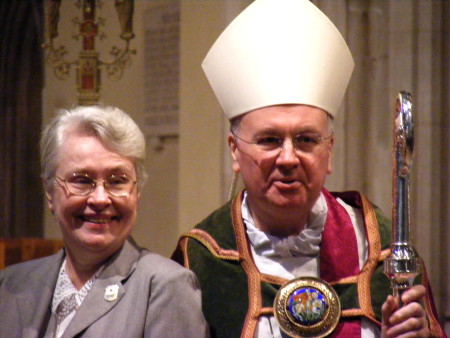 Sister Patricia Spillane, superior general of the order founded by Mother Cabrini, with the Archbishop of Southwark the Most Revd Kevin McDonald

St Frances Xavier Cabrini was born in Italy in 1850. She founded the Institute of the Missionary Sisters of the Sacred Heart of Jesus in 1880. Sent to North America by Pope Leo XIII to work amongst immigrants from Europe, she founded a worldwide network of schools, orphanages, hospitals and social centres before her death in 1917.

Mother Cabrini established a community in South London and regularly worshipped at St George's Cathedral during her time in Britain.

In 1946 she became the first citizen of the United States of America to be canonised by the Roman Catholic Church.

Now a new shrine to St Frances Cabrini has been created in a disused confessional in the south aisle of Southwark's Roman Catholic cathedral. The focal point of the shrine is a 5 ft circular bronze sculpture that places a group of migrants – stood on a pile of suitcases – at the centre of the image. One of the figures is depicted with a mop and bucket, representing the hard, manual labour often done by migrant workers.

A relic of the saint is displayed alongside the sculpture.

The shrine was dedicated on Advent Sunday by the Archbishop of Southwark, the Most Revd Kevin McDonald, who censed the sculpture and sprinkled it with holy water.

Speaking about St Frances Cabrini, the Archbishop said: "She is someone whose life and whose apostolate is directly relevant to the reality of today.

"She is not someone who inhabited an alien world. She speaks directly to real issues and real questions facing us today."

Sister Patricia Spillane, superior general of the Missionary Sisters of the Sacred Heart of Jesus, called on the congregation to "be inspired by her example of undaunted courage and wholehearted hospitality and seek to do the same in your own life".

The project to create the shrine was led by Canon James Cronin, dean of St George's Cathedral and co-ordinator of black and ethnic minority chaplains in the Archdiocese of Southwark. The work was funded by the Missionary Sisters of the Sacred Heart of Jesus.

"The purpose of a shrine is not simply to depict or celebrate a saint," explains Canon Cronin.

"Its purpose is to act as a meeting place between the spirits of the visitor and the saint and to be a place of prayer and welcome between the two.

"The shrine at St George's is a place where the visitor can come to meet Mother Cabrini and ask for her assistance."

St George's Cathedral hopes that the shrine will become a focal point for the many migrants – Catholic and non-Catholic – for whom South London is often a stopping-off point when they arrive in the UK.