Further scrutiny for Garden Bridge from London Assembly and RIBA

Members of the London Assembly this week passed a motion calling on the Mayor of London to withdraw public funding from the Garden Bridge project. 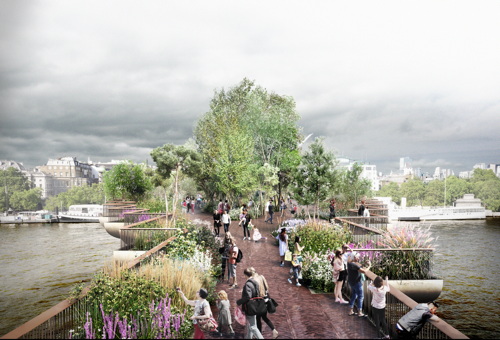 It's been a difficult week for backers of the £175 million footbridge between Temple Station and the South Bank, with Lambeth councillors ordering a rethink of the southern landing building and calling for improved public toilet provision.

Mayor of London Boris Johnson was already under pressure over his February 2013 trip to San Francisco to seek sponsorship for the Garden Bridge from Apple.

The trip took place before any official procurement exercise for the design of the bridge had been launched.

When bids for for the design of a footbridge were invited, Heatherwick Studio – which devised the project with Joanna Lumley – beat submissions from Wilkinson Eyre and Marks Barfield who were unaware of the proposed 'garden' concept.

This week it emerged that two key public officials linked to the bridge project – deputy mayor for transport Isabel Dedring (who accompanied Mr Johnson to San Francisco) and Transport for London's planning boss Richard de Cani – are both taking new jobs with Arup, the engineering firm working on the Garden Bridge.

Mayor of London Boris Johnson and Transport for London commissioner Mike Brown faced questions about the handling of the procurement process from Labour's Tom Copley at City Hall on Wednesday morning.

The Mayor told Mr Copley he was "very wrong" to "cast doubt on the integrity" of TfL officers.

TfL boss Mike Brown told London Assembly members: "I am absolutely satisfied of the integrity of Richard de Cani throughout this process."

Mr Copley added: "This entire process ... stinks. Mr Mayor, if this was New York you would be in front of a grand jury."

Later the assembly passed a motion proposed by Lib Dem Caroline Pidgeon AM and seconded by Labour's Tom Copley AM urging the Mayor to cooperate with inquiries into the Garden Bridge scheme and to withdraw public funding for the bridge.

This week Jane Duncan, president of the Royal Institution of British Architects, wrote to the Mayor to raise concerns about the procurement process.

Ms Duncan said: "The allegations relating to the procurement of the Garden Bridge are extremely concerning. All those who bid for work have a right to expect that their submissions will be judged fairly, transparently and in accordance with the law.

"Given the high profile nature of this project, the amount of public money at stake and the seriousness of the allegations, we would urge that the project is put on hold and the whole procurement process is then opened up to detailed scrutiny.

"This is by no means a comment on the work of the immensely talented Heatherwick Studio and Arup teams. Our concerns are about the fairness and transparency of the procurement process."

Vauxhall MP Kate Hoey told LBC on Wednesday that she will seek an adjournment debate in the House of Commons about the Garden Bridge project and will urge the National Audit Office to carry out further probes.