Plans to create a London School of Mosaic - building on Southbank Mosaics' pioneering work in SE1 - have been boosted by funds raised by a local resident during his year as master of his masonic lodge. 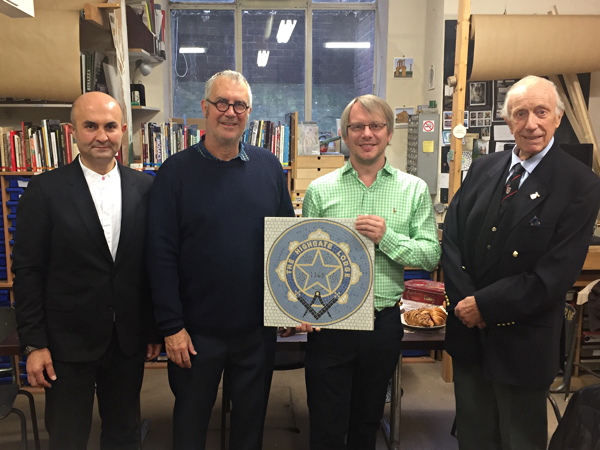 Local resident Hendrik Huthoff has been master of the Highgate Lodge of Free and Accepted Masons for the past year and says he didn't have to think twice when it came to selecting a good cause for the lodge to support during his year in office.

The lodge has raised more than £2,000 for Southbank Mosaics in support of efforts to create a London School of Mosaic.

Hendrick Huthoff is a keen mudlark and it was a chance encounter at The Mayor's Thames Festival which led to his first contact with Southbank Mosaics in 2008.

Eager to create an unusual Christmas gift for his family, he used the workshop underneath St John's Waterloo to complete a mosaic called "The Big Smoke" using clay pipes found on the Thames foreshore.

Huthoff soon became impressed by the ethos of Southbank Mosaics, led by David Toothill, which includes pioneering work with young offenders and other vulnerable people.

Southbank Mosaics' work adorns many public spaces in SE1 and further afield – including a series of mosaics based on the works of William Blake which can be found under railway arches in North Lambeth.

David Toothill now hopes to establish a London School of Mosaic which will teach the UK's first and only degree programme in applied mosaic studies.